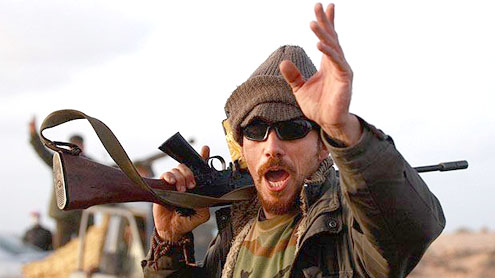 TRIPOLI: Libyan rebels beat back an attack by forces loyal to Libyan leader Muammar Qaddafi on the town of Misrata on Sunday, residents said.Government forces used tanks and artillery in what appeared to be their most concerted effort yet to retake the town, 200 km east of the capital Tripoli, but were pushed back by rebels fighting Qaddafi’s 41-year-old rule. “The (pro-Qaddafi) brigades tried to reach the center of the town but revolutionaries managed to repel them. They (the brigades) retreated to the airbase,” said one resident, who did not want to give his name, said.“The revolutionaries captured 20 soldiers and seized a tank. The town is now fully in the control of the youths.” Misrata is the largest population center controlled by Qaddafi opponents outside the rebel-held east of the country. If rebel soldiers are able to continue their fitful advance westwards, Misrata could be a stepping stone to reaching the capital, Qaddafi’s principal stronghold.Saudi Arabian Airlines has evacuated Saudis living in Libya as well as the families of Saudi Embassy staff in the country following instructions from Custodian of the Two Holy Mosques King Abdullah.Moejib Al-Dossary, Saudia’s manager for Tunisia and Libya, said the evacuation was carried out in coordination with the Civil Aviation Authority in Libya.“We have airlifted more than 90 passengers in record time despite a lack of human and technical capabilities at Tripoli International Airport,” he said.Witnesses in Misrata, which has been under rebel control for over a week, earlier said the government attack was led by units of a militia led by Khamis, a son of the Libyan leader.“Very, very heavy fighting is taking place now at the western entrance of the town. The fighting started about an hour ago after an attack by brigades belonging to Khamis,” resident Mohamed said by telephone. “They are destroying everything they find. They are using artillery and tanks,” he said.

Sustained artillery fire was heard on the road to the Libyan flash point of Bin Jawad, the site of deadly clashes between rebels and regime loyalists on Sunday.Rebels said earlier on Sunday that they had withdrawn from Bin Jawad after being ambushed by Qaddafi forces and coming under heavy fire. Near the last checkpoint on the edge of Ras Lanouf, about 30 minutes’ drive from Bin Jawad, excitable rebels on the highway pointed to the sky and opened fire with anti-aircraft machine guns. An aircraft was seen flying overhead and then suddenly smoke shot up from the horizon about four km away.Meanwhile, the chairman of the Senate Foreign Relations Committee in the US says the country and its allies should plan for a no-fly zone over Libya. Democratic Sen. John Kerry says the no-fly zone shouldn’t go into operation without an international agreement. The senator says he doesn’t see a no-fly zone as stepping over the line into military intervention. Kerry says that moving against Libya’s air force should be considered only as a response to attacks on civilians by Qaddafi – Arabnews