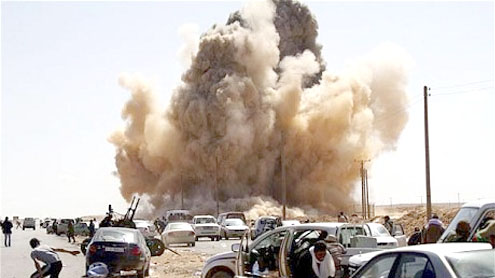 Britain and France said they were seeking U.N. authorisation for a no-fly zone over Libya, as Muammar Gaddafi’s warplanes counter-attacked against rebels and aid officials said a million people were in need.Al Jazeera television said rebels had rejected an offer by Gaddafi to hold a meeting of parliament to work out a deal under which he would step down.With civilians surrounded by forces loyal to Gaddafi in two western towns, Misrata and Zawiyah, fears grew of a rising humanitarian crisis if the fighting continued.U.N. aid coordinator Valerie Amos said more than a million people fleeing or inside the country needed humanitarian aid.”Humanitarian organisations need urgent access now,” she said. “People are injured and dying and need help immediately.”The U.N. appealed for $160 million (98 million pounds) to fund an operation over the next three months to get shelter, food and medicines ready.”We are working closely with partners on a contingency basis on elements of a resolution on a no-fly zone, making clear the need for regional support, a clear trigger for such a resolution and an appropriate legal basis,” Foreign Secretary William Hague said on Monday.A French source said France was “working with our partners in New York on a no-fly zone resolution.” Gulf states called for a no-fly zone and an urgent Arab League meeting.U.S. Defence Secretary Robert Gates, in Afghanistan where foreign forces have struggled for a decade, warned action should be taken only with international backing. The White House said all options were on the table, including arming rebels.Russia, a permanent member of the U.N. Security Council with veto powers, said it opposed foreign military intervention.NATO Secretary-General Anders Fogh Rasmussen stressed the need for U.N. authorisation. “I can’t imagine the international community and the United Nations would stand idly by if Gaddafi and his regime continue to attack their own people,” he said.”We have asked our military to conduct all necessary planning so that we stand ready at short notice,” he added.NATO has launched 24-hour surveillance of Libya with AWACS reconnaissance aircraft, the U.S. ambassador to NATO said.Ivo Daalder added NATO representatives were discussing other possible moves ahead of a meeting of NATO ministers on Thursday – Reuters