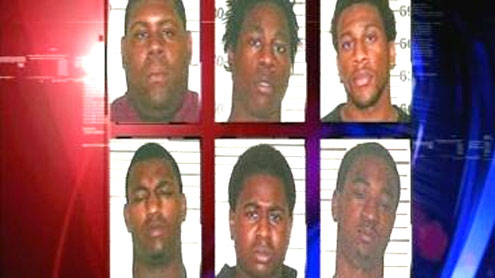 Thirteen adults and five juveniles have been arrested as part of an investigation into the alleged rape of a Texas girl, police said.Darrell Broussard, assistant police chief for the Cleveland, Texas, police department, said Monday that the investigation into the incident “is continuous,” with more significant developments possible. Cleveland is about 50 miles northeast of Houston.”There have been leads during our investigation that have alerted us to other possible persons of interest,” Broussard told CNN. “The investigation is ongoing.”The 18 individuals charged thus far are between 14 and 27 years old, he said.On Friday, the Cleveland police department announced that four students in the Cleveland independent school district had been arrested on charges of aggravated sexual assault of a child under 14.They appeared Monday in a Liberty County court, in the town of Liberty, to face the charges.Police noted that some but not all suspects are students at Cleveland High School, though all those named thus far are from the town.Mike Little, the district attorney in Liberty County, said police would likely decide whether more people would be charged. He offered few other details, saying, “We are very careful about pretrial publicity.”The incident allegedly happened late last year in Cleveland. The case has sharply divided the community, according to CNN affiliate KHOU, which reported the girl was 11 years old.”It just seems like a dream,” said Sherry Fletcher, whose 20-year-old son Devo Shaun Green is among those charged according to Cleveland police. “I just hope everything comes out well, because some of these kids are innocent.”Those adults arrested and charged with sexual abuse of a child, a first-degree felony in Texas, could face 25 year to life in prison if convicted, according to the police department – CNN