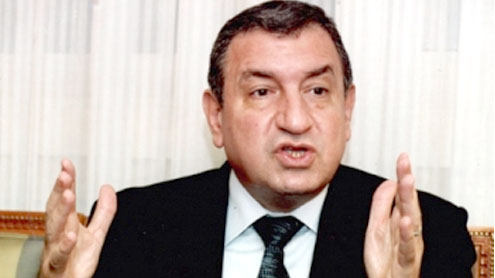 New Prime Minister Essam Sharaf said on Monday he would work to get Egypt’s economy back on its feet after weeks of protests and political turmoil, speaking after a ceremony to swear him and his new cabinet into office.The cabinet reshuffle is the latest reform to meet the demands of protesters calling for a purge of officials linked to Hosni Mubarak, who was forced from the presidency on February 11.Analysts said the new government would have to tread a fine line as it works to meet the high expectations of newly empowered Egyptian workers while restarting an economy that nearly ground to a halt during weeks of protests.”Our priorities are to regain security and stability as fast as possible and to get the wheel of production rolling again,” Sharaf told reporters.In the wake of protests, workers have gone on strike for better pay, while high prices that drove people to the streets remain high, the stock market has stayed closed after more than a month and the Egyptian pound has weakened.”We confirm that Egypt’s economy is a free economy but within the framework of social justice,” Sharaf added. “The economy will come back stronger than it was before.“New interior, foreign affairs and justice ministers were sworn in, key portfolios that were important targets for reformists.Until Sharaf’s appointment, those posts had stayed in the hands of ministers appointed when Mubarak was still in power.Nabil Elaraby, a former International Court of Justice judge, was named minister of foreign affairs, replacing Ahmed Aboul Gheit, the face of Mubarak’s foreign policy since 2004 and the most prominent minister to hang onto his post this long.Mansour el-Essawy, appointed interior minister, is not viewed as being part of the inner circle of former Interior Minister Habib al-Adli, who held the post for 13 years until Mubarak removed him from his job last month, analysts said.The newly named justice minister, Mohammed al-Guindy, has pledged to fight corruption and run presidential and parliamentary elections overseen by the judiciary, sidelined when Mubarak was in power and elections were routinely rigged.

“The new cabinet has a grace period of about a month,” said Ezzedin Choukri-Fishere, professor of political science at the American University in Cairo. “It comes on a wave of goodwill and optimism, because everyone wants this government to work.””But at the same time, they have a grace period that is very short because the expectations are so high. If they don’t start the key work soon, these expectations will be dashed and turned into something else.One of the main challenges will be redeploying the police force, which largely disintegrated in the early days of the uprising and is tarnished by a reputation for brutality that helped fuel the protests.Essawy vowed on Sunday that he would work to improve the image of the police force and shrink the role of the state security apparatus, hated by many Egyptians particularly after their conduct during the demonstrations – Reuters