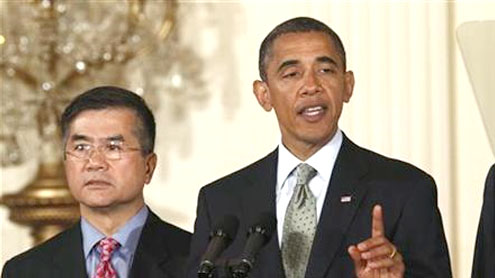 President Barack Obama will nominate Commerce Secretary Gary Locke as next ambassador to China, two administration officials said on Monday.Locke, a Chinese American, would replace the current ambassador, Jon Huntsman, who is stepping down on April 30 and is considering a run for president in which he’d join a field of Republicans vying to challenge Obama in the 2012 election.An official announcement on Locke could come as early as on Tuesday.Locke, whose appointment must be confirmed by the U.S. Senate, became the first Chinese-American Commerce Secretary when he joined the Obama administration in 2009.He is a former governor of Washington state. His grandfather emigrated from China to the state. Locke’s father was also born in China and ran a grocery store in the United States.Locke, who made a number of trips to China while he was governor of Washington, has remained active on that front as Commerce secretary.Last year, he led a group of nearly two dozen corporate executives on a mission to explore opportunities in China’s fast-growing clean energy sector. He has warned that the United States risks being left behind as China plows billions of dollars into solar, wind and other “green” technologies.Locke played a high-profile role in the summit between Obama and Chinese President Hu Jintao in January. Ahead of Hu’s U.S. visit, Locke gave a speech urging China to open its markets and called for a “more equitable” trade relationship.Huntsman, a former Republican governor of Utah, raised eyebrows in the White House when he sent signals several weeks ago he was considering entering the 2012 presidential race.Huntsman has sparred with Chinese officials in recent weeks over human rights issues, including his condemnation of the harassment of foreign reporters seeking to cover protests.He is expected to make a decision on whether he will run for president when he returns from China at the end of April – Reuters