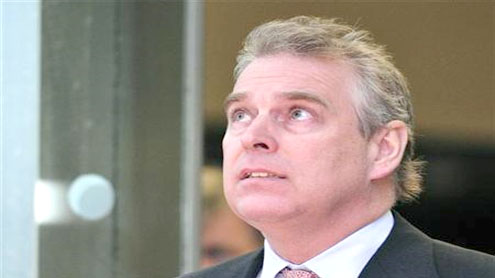 The royal family is supposed to burnish Britain’s image, but Prince Andrew has generated quite a different buzz by consorting with a convicted U.S. paedophile and having contacts with the Libyan leader’s son.”Prince of Sleaze” ran a headline in Monday’s Daily Mirror over a story about the 50-year-old Duke of York, who is fourth in line to the throne and is Britain’s roving trade ambassador.”Andrew: I won’t quit over my pervert pal,” the Sun added.The stories were a long way from the gushing coverage the British media have reserved for Andrew’s nephew Prince William and fiancée Kate Middleton ahead of their wedding next month.Andrew has long had a strained relationship with newspapers, who have printed photographs of him enjoying himself on yachts or sunbathing surrounded by topless women, and nicknamed him “Airmiles Andy” for his use of publicly funded travel.Andrew is now in hot water over his friendship with New York financier Jeffrey Epstein, who was jailed in 2008 for child sex offences.His alleged links to Libyan leader Muammar Gaddafi’s son Saif al-Islam and the son of Tunisia’s ousted president, Zine al-Abidine Ben Ali, also have come under media scrutiny.The revelations have led to calls for Andrew, to lose his voluntary position as a special representative for a government body promoting British businesses abroad, a role he has held since 2001.MP Chris Bryant, a member of the Labour Party, said the government should get rid of Andrew immediately.”They should be absolutely clear: ‘We are going to dispense with his services’,” he told BBC radio.

Association with Saif al-Islam at a time when Libya was being courted by western countries has already put others under pressure. On Thursday the director of the London School of Economics quit for having advised the LSE to accept 1.5 million pounds ($2.4 million) in 2009 from Saif’s foundation.A royal source said the prince had met Saif al-Islam twice, and they were not friends, and that Andrew accepted he had been unwise to have associated with Epstein since his conviction.”There’s no accusation he’s done anything wrong and there’s been no suggestion of any impropriety on his part because there has been none at all,” the source told Reuters. “You won’t be seeing him and Mr Epstein in a photograph again.”Sarah Ferguson, who divorced the prince in 1996, said he was a “first-rate man” who worked tirelessly for Britain – Reuters