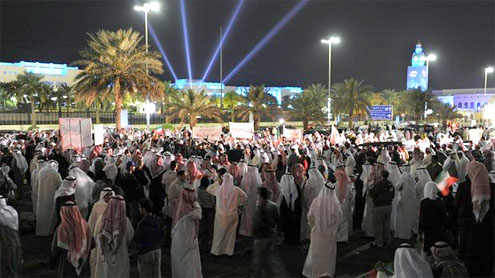 KUWAIT CITY: Protesters gathered outside Kuwait’s main government building Tuesday to demand sweeping changes on how the oil-rich country is run as another Gulf state joined the surge for reforms around the Arab world.Security forces stood by as hundreds of demonstrators moved into an area outside a building holding key offices including Kuwait’s emir and the prime minister, who is accused by pro-reform groups of stifling political freedoms and muzzling dissent. The initial crowd was limited, but protest organizers had to switch venues after police blockaded the central Safat Square in Kuwait City.Although the protests mark the first in Kuwait since the stunning Arab uprisings, the oil-rich Gulf nation is no stranger to political showdowns. Kuwait has the region’s most powerful parliament and opposition lawmakers have waged open battles against the ruling system, including nearly bringing down the prime minister two times with no-confidence votes.One of the protest slogans: “Leave! We Deserve Better!” Others waved banners saying “New country with a new prime minister.” The planned rallies were timed to dovetail with the return of parliament from a nearly monthlong recess.

One of the first acts was the swearing-in of the new interior minister, whose predecessor was dismissed in January following an uproar when a suspect accused of illegal liquor sales was beaten to death in police custody.But the main target of Kuwait’s opposition remains the prime minister, Sheik Nasser Al Mohammed Al Sabah, a nephew of Kuwait’s emir. Protesters also seek to break the exclusive grip on power by the ruling family, which holds all major government posts and controls the oil riches in the world’s fourth-largest producer – Arabnews