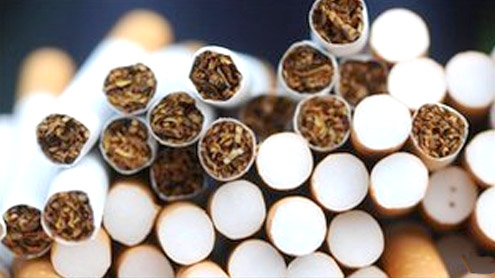 Tougher steps covering the sale and promotion of tobacco products are to be unveiled by ministers later.The Department of Health in England is expected to say that it will push ahead with a ban on the display of tobacco products in shops in the coming years.A consultation will also be launched on forcing tobacco companies to put cigarettes into plain packets.The measures are part of a plan to drive down smoking rates, particularly among young people.Just over a fifth of adults smoke – a figure which has remained pretty steady in recent years after decades of more rapid falls.Both steps have been under discussion for a number of years with legislation to ban the display of tobacco products put in place by the Labour government before it lost power last year.A number of countries, including Canada, Ireland, Iceland and Finland, have already introduced similar bans, while Scotland and Northern Ireland are moving in that direction. In England, it will be phased in over the next couple of years, the government is expected to say, after putting off the move when it came to power.But England will be the first country in Europe to force tobacco companies to put cigarettes in plain, unbranded packets, if it goes ahead. Australia is due to introduce the measure in 2012.The plain packaging measure is only a proposal at this stage and will be put forward for consultation. Campaigners believe it will make purchasing cigarettes less appealing and enhance the effectiveness of health warnings.Both measures will be set out as part of the government’s tobacco control strategy, which marks the start of the publication of a series of public health plans. Separate strategies on alcohol and drugs are expected in the coming months.Martin Dockrell, of the campaign group Ash, said there was “strong evidence” that the measures would stop people taking up smoking.

On banning shop displays, he added: “Regular smokers know what brand they smoke before they go into the shop and don’t need a display to remind them. In truth, these displays serve two functions – they promote brands to new young smokers and they trigger sales to people who did not intend to buy. Every morning when the ex-smoker goes into a shop to buy a paper the tobacco companies are waiting for them, putting their brand in front of them.”Shadow public health minister Diane Abbott said she welcomed the moves, but said they were “building on” what Labour had done through its anti-smoking legislation, including the ban on smoking in public places and on the advertising of tobacco products.But ahead of publication of the strategy, the government was criticised by a Tory backbencher.

Philip Davies, the MP for Shipley, said the plain packaging plan was “gesture politics of the worst kind” and would represent a “triumph for the nanny state”.Defending himself in the House of Commons, Health Secretary Andrew Lansley said the purpose of his plans was to reduce the “number of people smoking and as a consequence avoidable deaths and disease”.But Debbie Corris, of the Tobacco Retailers Alliance, said: “There is no evidence this will reduce smoking. If anything, plain packaging will cause a problem with more counterfeiting – plain packets are not that difficult to copy – while banning displays will hit smaller retailers hard. We are disappointed about this – BBC