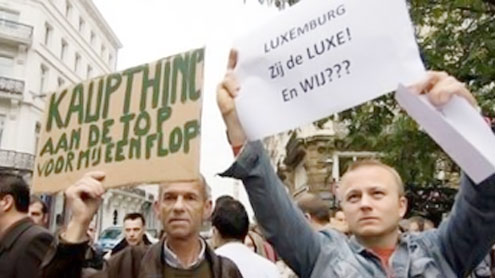 LONDON: Property magnates Robert and Vincent Tchenguiz have been briefly detained in London as part of an international probe into the collapse of Icelandic bank Kaupthing.The Iranian-born brothers — once listed among Britain’s richest men — released a statement saying they were “co-operating fully” with police and they were confident of being “cleared of any allegation of wrongdoing”.A spokesman for the brothers confirmed they had been released later Wednesday but said he was unable to provide further details.The Serious Fraud Office (SFO) said they would “only provide an update when all suspects have been dealt with”.The pair were among seven men arrested in dawn raids across the capital in connection with the fall of Kaupthing, one of three Icelandic banks that failed during the credit crunch in 2008.The brothers said: “We were arrested earlier this morning and are being questioned with regard to matters relating to our relationship with Kaupthing Bank.”Both of us are co-operating fully with the investigation and are confident that, once concluded, we will be cleared of any allegation of wrongdoing.”The SFO announced an investigation into suspected fraud in December 2009 surrounding British investment in what was billed as a “high-yield” deposit account called Kaupthing Edge.The SFO added that two people had also been arrested in Iceland as part of the probe.

Kaupthing had an estimated 30,000 British investors. The Tchenguiz brothers are believed to have substantial dealings with the bank and lost heavily when it failed.An SFO spokesman said: “This is a complex investigation which crosses numerous jurisdictions.”We have been working closely with the Icelandic special prosecutor’s office to ensure that comprehensive and robust investigations are conducted, both in Iceland and the United Kingdom, and to ensure that there is no duplication of effort. We will continue to do so.”Kaupthing built up businesses abroad during the boom years before the crash, using cheap debt to acquire a stable of varied assets.But it found it could not cover its obligations when credit dried up in 2008 and the Icelandic government was forced to rescue it and its peers – Yahoonews