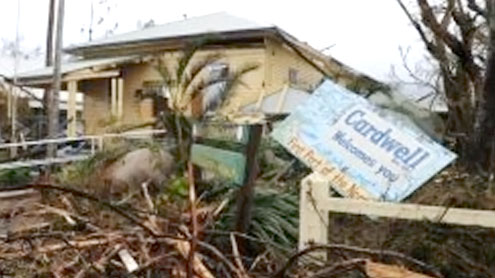 BRISBANE: Pounding rains Thursday flooded homes and isolated towns in eastern Australia that were still struggling to clean up after a monster cyclone that ravaged the area last month.Towns littered with the mangled remains of buildings decimated by Cyclone Yasi were thigh-deep in flood water spawned by storms that have dumped up to 321 millimetres (12 inches) of rain on parts of Queensland since Wednesday.”It’s pretty devastating because just when you think you might be getting ahead, you find yourself another two steps behind,” said pensioner Rita Porter, who lives in the disaster-battered town of Cardwell.Cardwell was cut off by the rising waters and was beginning to run out of basic food supplies, residents said, as forecasters warned worse was to come with more rainfall and possible flash flooding Thursday and Friday.

Three other towns that were badly damaged by Yasi and the flooding that followed it — Mission Beach, Tully Heads and Hull Heads — were also stranded by the rising waters, emergency services said.”Today and tomorrow will be the worst for those townships,” senior forecaster Bryan Rolstone told the AAP news agency, warning that conditions would deteriorate for residents before they improved.”Because the catchment is saturated, flooding is very easy and when we have heavy rain, flooding is more likely.”Queensland has been hit by wave after wave of natural disaster in the past two months.Dramatic flash flooding shattered homes and swept away cars near the state capital Brisbane in January, killing around 30 people, and widespread flooding wrought havoc in the southeast of the state, drowning parts of Brisbane.Top-strength Cyclone Yasi then ripped through the north of the state in early February, causing widespread damage in towns including Cardwell, Mission Beach and Tully, but miraculously claiming no lives.

Now some residents face clearing mud and debris from their homes again, with the monsoon rains showing no signs of abating.At least 12 homes were flooded in the Cardwell area and the main road leading to the town was closed, while homeowners whose damaged houses were covered by tarpaulin since Yasi were battling leaks.”Some (residents) got out of the cyclone to be hit with floods,” said newsagent Richard Doran in Cardwell, adding that six locals had been forced by the “cruel situation” to sleep in an evacuation centre on Wednesday night.”It’s pretty dismal again, still raining — just steady all night, the gutters are full,” he told public broadcaster ABC.

As supplies in the stranded towns ran low, authorities were trying to get provisions to stricken residents.Elderly Molly and Archie Dunn have been forced to live in their garage in Cardwell after their property lost windows, parts of walls and all the furniture when Yasi roared through the area, causing billions of dollars of damage.”We’re dodging the leaks. We are getting a bit sick of it,” Mr Dunn, 84, told AAP.Emergency Management Queensland spokesman Daryl Camp said the huge clean-up operation following Cyclone Yasi was still under way more than a month after the disaster, which tore off roofs, pulled down walls and ruined crops.”Now we get the rain on top of it — you can see that the people aren’t taking it really well,” he said. “It’s one more thing to add to their list of burdens – Yahoonews