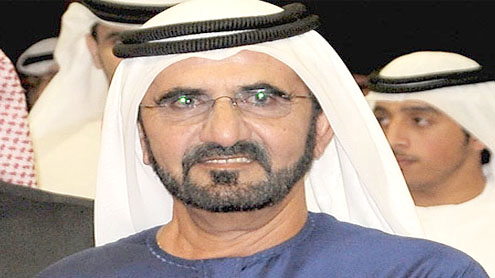 DUBAI: Dubai has recovered from the economic downturn, its ruler Sheikh Mohammed bin Rashid Al-Maktoum said.Sheikh Mohammed, whose remarks were posted on his official website on Wednesday, also said that while many government agencies performed well during the financial crisis, others failed to meet expectations.”We are not in the process of holding departments accountable, what’s done is done,” said Sheikh Mohammed in a statement on his website.Dubai is struggling to emerge from a crippling debt crisis which erupted openly in 2009 after its flagship conglomerate Dubai World said it would seek a $26 billion debt standstill.The glitzy Gulf Arab emirate needed a last-minute $10 billion bailout from neighbor Abu Dhabi and has been busy restructuring key state-linked firms’ debts.Sheikh Mohammed said the crisis required a financial regulatory system to oversee government departments but will not curb future development.”We must look forward and find ways to work freely without hindrance,” he said.Meanwhile, the central bank governor said on Thursday the UAE has not seen capital outflows due to unrest in the region, adding that inflationary pressures would not be of concern despite high oil prices.Anti-government protests rocking the Arab world have spread to Gulf countries such as Bahrain and Oman although there have been no unrest in the UAE, which includes oil-exporting Abu Dhabi and business hub Dubai.”There is absolutely nothing unusual. No capital outflows,” Central Bank Gov. Sultan Nasser Al-Suweidi told reporters at a news conference after a meeting of six Gulf Cooperation Council central bank governors.When asked about the risk of potential capital outflows to the dirham peg as the unrest spreads, Al-Suweidi said: “I do not think it will be the case.””It (turmoil) affects (UAE banking sector), but its effect is slight due to the distance,” he said after a meeting of Gulf central bank governors.

Al-Suweidi also said he was not concerned about inflation in the UAE, the world’s third largest oil exporter, despite robust oil prices of above $100 per barrel.”I am not worried about inflation at this point of time because originally inflation came from high rent rates. It will range in low, single-digit rate,” he said declining to give specific forecast.UAE consumer price growth eased to 1.6 percent on an annual basis in January as an unexpected drop in food costs helped to push living costs into a second monthly decline in a row.Brent crude futures slipped on Thursday but remained above $115 per barrel as forces loyal to Libyan leader Muammar Qaddafi launched a fresh bombardment on the eastern Libyan oil town of Ras Lanuf.Consumer price growth in the world’s third largest oil exporter hovered close to 1 percent for most of 2010 as debt woes of Dubai state-owned companies dented banks’ lending appetite.Al-Suweidi also declined to say whether the UAE has received any specific requests to freeze assets of the Libyan government or those of ousted Tunisia’s president.”I will not mention any country as we deal with assets, accounts and all types of investments according to procedures, well known procedures identified by FATF (Financial Action Task Force). Therefore we follow the steps as anybody else does.””If we receive them (requests for asset freeze) we process them in a normal way,” he said – Arabnews

Balki to reluanch Sridevi. Time for No Entry Mein Entry