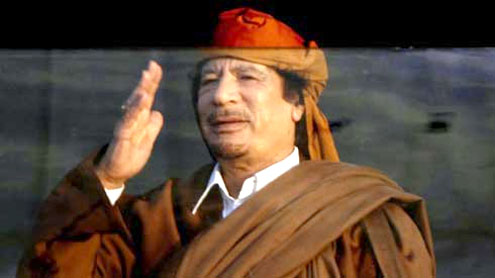 TRIPOLI: Forces loyal to Libyan leader Muammar Gaddafi entered the oil port of Ras Lanuf in tanks and boats overnight as they intensified their counter-attack into the insurgent heartland.Contacted by Reuters in the early hours, rebel fighter Ibrahim al-Alwani said he and comrades still in Ras Lanuf had seen government troops in the town center.”I saw maybe 150 men and three tanks,” he said. “I can hear clashes.”Another rebel reported clashes with Gaddafi troops who had landed in Ras Lanuf by boat.West of Tripoli, street fighting was reported in Zawiyah, which has changed hands several times in recent days. Residents described scenes of carnage, with women and children among the dead.Gaddafi’s son Saif al-Islam told the rebels on Thursday they faced a full-scale assault to crush their three-week-old uprising.”It’s time for action. We are moving now,” he told Reuters in an interview. “Time is out now … we gave them two weeks (for negotiations).”

As the military momentum appeared to turn against the rebels, foreign powers were at odds over how to end the turmoil and force Gaddafi out.Gulf Arab countries said Gaddafi’s government was no longer legitimate and France and Britain jointly called on the European Union to recognize the rebel council based in Benghazi.Despite a flurry of meetings, foreign governments came no closer to deciding on action. The United States and NATO’s chief expressed doubt over the wisdom of imposing no-fly zones without full international backing and a legal justification.The African Union rejected any form of foreign intervention but said it was sending a delegation of five heads of state to Libya soon to try to arrange a truce in the hostilities.In a sobering view of the bloodiest of the uprisings now shaking the Arab world, U.S. National Intelligence chief James Clapper said in Washington that Gaddafi was “in this for the long haul” and was likely to prevail.

London-educated Saif al-Islam Gaddafi, previously seen as a potential reformer, said in the interview that Libya would defeat the rebels even if Western powers intervened.”We will never ever give up. We will never ever surrender. This is our country. We fight here in Libya,” he said, speaking in a compound in Tripoli. “Libya is not a piece of cake.”Rebels in Ras Lanuf reported clashes with Gaddafi forces who landed by boat.”Four boats carrying 40 to 50 men each landed there. We are fighting them right now,” Mohammed al-Mughrabi, who described himself as a spokesman for the rebels, told Reuters by phone.In the west, Gaddafi’s troops laid siege to Zawiyah to try to starve out insurgents clinging to parts of the shattered city after see-saw battles this week.One fighter said rebels had retaken the heart of Zawiyah from the army overnight. Authorities have kept journalists away from the town, about 50 km (30 miles) west of Tripoli.The rebels received a boost in their quest for international legitimacy when France recognised their Libyan National Council. An aide to President Nicolas Sarkozy said an ambassador would go to Benghazi and a Libyan envoy would be received in Paris.

Sarkozy and British Prime Minister David Cameron said Gaddafi and his clique had lost legitimacy and must step down.In a joint declaration sent to the president of the European Union Council, they said plans must be made to help the insurrection, including a no-fly zone over Libya. They urged the European Union to recognize the rebel national council.EU foreign ministers meeting in Brussels could not agree whether the bloc as a whole should recognize the Benghazi-based rebel council, although they did decide to tighten sanctions on Gaddafi’s government.In separate talks, NATO foreign ministers discussed imposing a no-fly zone over Libya to stop the government using air power against the outgunned rebels.NATO Secretary-General Anders Fogh Rasmussen said this could happen only with a demonstrable need, a clear legal basis and firm regional support, not all of which now apply. This would require evidence of war crimes against civilians.The United States, scarred by costly and controversial wars in Iraq and Afghanistan, appeared to be backing away from military action in another Muslim country.U.S. Secretary of State Hillary Clinton said international consensus was needed for the next steps on Libya.In Geneva, the International Committee of the Red Cross said Libya had descended into civil war with increasing numbers of wounded civilians arriving in hospitals in the east.The Greek government said three Dutch marines arrested in Libya had been released and were being evacuated aboard a Greek military plane early on Friday – Yahoonews