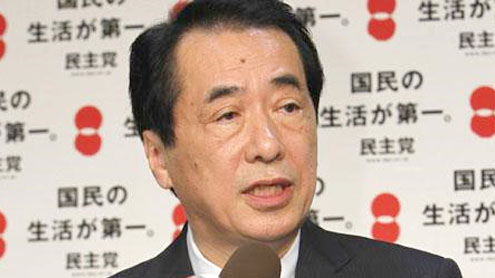 Japanese Prime Minister Naoto Kan said on Friday he would not step down after it emerged that he had received political donations from a foreign national, days after his foreign minister quit over a similar issue.The unpopular Kan was already facing calls to resign or call a snap election and has been struggling to pass bills to implement a $1 trillion (622 billion pounds) budget for 2011-12 in parliament, where opposition parties are blocking the legislation and attacking the government over policy missteps.Analysts said they expected him to stand firm.”Kan was already suffering from 100 wounds, this donation affair is just the 101st,” said political analyst Hirotaka Futatsuki, predicting that he would hang on until at least June.The Asahi newspaper said that donations from a Korean national living in Japan totalling over 1 million yen (7,500 pounds) were received by Kan’s political funds group in 2006 and 2009, including in November 2009 when Kan was serving as deputy premier after his Democratic Party of Japan (DPJ) took power for the first time.Some 600,000 ethnic Koreans live in Japan, many of whom are descended from those who came when the Korean peninsula was a Japanese colony from 1910-1945.Accepting donations from foreign nationals is illegal if done so knowingly.”I had thought that this person was a Japanese national,” Kan told a parliamentary committee. “I checked with my office and it had indeed received donations (from this person) … If this person is confirmed to be a foreign national, I would like to fully return the donations.”Kyodo news agency quoted Kan as saying he would not resign and Chief Cabinet Secretary Yukio Edano told a news conference: “I have heard that the prime minister is absolutely not thinking about such a thing.”Kotaro Nogami, an upper house lawmaker from the main opposition Liberal Democratic Party, said the problem would not go away by simply returning the money.

“Hearing Prime Minister Kan’s response, I cannot feel a sense of crisis and responsibility about this issue.” he told parliament. “The LDP will exhaustively pursue this issue.”Seiji Maehara resigned as foreign minister last Sunday after he admitted taking political donations from a Korean national living in Japan, adding to pressure on a prime minister whose popular support is languishing around 20 percent.”He cannot quit because the government would collapse. But the administration will be further weakened,” analyst Futatsuki said.If Kan did step down, becoming the fifth Japanese premier to exit after a year or less in office, it would create further uncertainty over the fate of bills needed to implement the budget and policies needed to curb public debt already twice the size of the $5 trillion economy.Some analysts had expected that Kan might resign in return for a deal with opposition parties to enact the budget bills, which require approval of the opposition-controlled upper house. But if he was forced to step down over the donations scandal, there would be little prospect for such a trade-off – Reuters