Muslim hearings in US Congress dismissed as ‘equivalent of reality TV’ 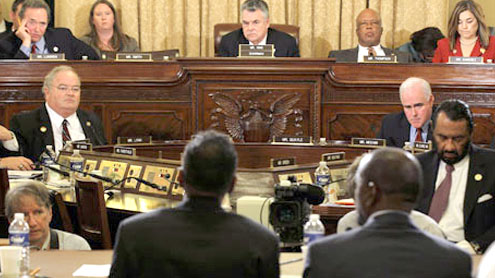 A congressional hearing into home-grown Islamist terrorism opened with scenes of high emotion today as tears were shed by the first Muslim elected to Congress.The much anticipated hearing was claimed by its organisers to be crucial to national security but generated little new information or insight into how or whether al-Qaida was actively recruiting on US soil or how grave a potential threat that might be.Yvette Clarke, a New York Democrat, dismissed the proceedings as congressional theatre. “It’s the equivalent of reality TV,” she said.There was certainly drama. In the hearing’s tense opening moments, Keith Ellison, a Democrat from Minnesota, broke down as he recalled a young Muslim paramedic who died during the 9/11 attacks.”Mohammed Salman Hamdani was a fellow American who gave his life for other Americans,” Ellison said, his voice muffled by tears. “His life should not be defined as a member of an ethnic group or a member of a religion, but as an American who gave everything for his fellow citizens.”

The congressman then gathered his papers and was gone.Ellison’s loss of composure was a reminder of the passions generated by a hearing focused solely on the threat posed by the radicalisation of America’s five million Muslims and the response of community leaders to that threat.Peter King, the pugnacious Republican from New York who chairs the homeland security committee, had faced multiple calls to cancel the hearing.Protesters said the very title – “The Extent of Radicalisation in the American Muslim Community and that Community’s Response” – reeked of a McCarthyite witch hunt against America’s Muslims.King intends the hearing to be the first in a series of examinations on the rise of Islamist extremism within America. The hearings – even more controversially – are also exploring whether the Muslim community at large is refusing to co-operate with police.Even the White House warned against the danger of tarring an entire community. “In the United States we don’t practise guilt by association,” said spokesman Jay Carney. “We believe Muslim Americans are part of the solution.”

King was unmoved by the appeals. “I am well aware that these hearings have generated considerable controversy and opposition,” he said. “But to back down would be a craven surrender to political pressure.”He rejected the charge that the hearings were a 21st-century version of McCarthyism, or were inciting hatred with their specific focus on the response of the entire Muslim community. “There is nothing radical or un-American in holding these hearings.”On a wet and dreary day, campaigners and members of the public began converging on the congressional office building at about 7am. A few had placards reading: “Today I am a Muslim too.”Inside the packed committee room, however, the proceedings appeared to be in little danger of generating any insights into al-Qaida operations or threat levels on US soil.Much of the testimony offered up by witnesses was highly personal, anecdotal or a rehashing of FBI reports. The committee heard from the relatives of two young men who had been recruited by extremist networks, and the leader of a small community organisation who is a frequent commentator on Fox News; and Melvin Bledsoe described how his son, Carlos, accused of killing a soldier at an army recruiting centre in Arkansas, was manipulated by extremists at the local mosque in Nashville.

“Carlos was captured by people best described as hunters,” his father said.The sole security expert called was Lee Baca, sheriff of Los Angeles County, who told the committee that evidence from the Muslim community had helped thwart seven of the last 10 planned attacks.Response from members of Congress followed party lines. Democrats warned of the dangers of stigmatising an entire community, saying the committee should also investigate other extremists – white supremacists, the Ku Klux Klan, neo-Nazis, eco-warriors; Republicans tried to explore whether mass-membership Muslim organisations were front groups for terror organisations.Members from both parties discussed their own faith traditions, and recounted their friends in the Muslim community.At one point, Sheila Jackson Lee, a veteran Democratic member of Congress from Texas, exploded. “There is no redeeming factual information that any of us will receive today,” she said. “It has already been tainted, this hearing. There is no loud sign of reasoning coming out of this hearing – Guardian