by top2
in Asia, International News
0 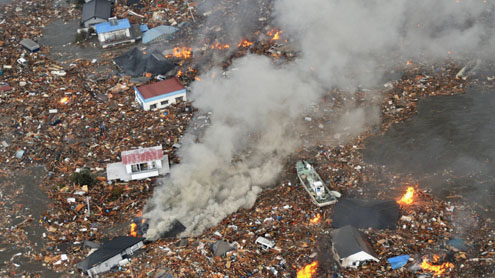 The strongest earthquake ever recorded in Japan rocked the Tohoku region coast Friday afternoon, triggering tsunami including a 10-meter wall of water that submerged residential areas and farms and washed away scores of people, vehicles, boats and devastated ports.

The death toll is likely to surpass 1,000 as about 1,800 houses in Fukushima Prefecture were found to have been devastated, according to the Defense Ministry.

According to a National Police Agency tally as of 5:40 a.m. Saturday, at least 184 people were killed and 708 others were missing as a result of the magnitude 8.8 temblor.

Meanwhile, around 200 to 300 bodies were found in Sendai’s Wakabayashi Ward, the Miyagi prefectural police said. Officials of the ward facing the Pacific Ocean said almost all of the approximately 1,200 households within a district where a tsunami alert was issued were affected by tsunami waves.

Several hundred other people were injured across an extensive area of Japan, the police said.

Another strong quake with a magnitude of 6.7 rocked an inland area on the Sea of Japan coast northwest of Tokyo, hitting Nagano and Niigata prefectures at 3:59 a.m. Saturday, but the extent of the damage from the quake, which occurred far away from the one that jolted Pacific coastal areas, was not immediately known.

Miyagi police reported late Friday night that one train derailed and contact has been lost with another on the JR Senseki Line in the coastal area in the prefecture.

Of the confirmed fatalities, at least 33 people died in Iwate Prefecture as a result of the quake, including some due to tsunami, while one or more deaths were reported in Fukushima, Miyagi, Tokyo, Ibaraki, Chiba, Kanagawa and Tochigi prefectures, according to local officials.

The 10-meter tsunami was observed at Sendai port at around 3:55 p.m., police said.

A tsunami expert at the government-affiliated Port and Airport Research Institute described the surge following the 2:46 p.m. quake as “one of the highest and widest in terms of areas of devastation in the nation’s history.”

“It’s a tsunami of a once-in-a-century scale,” said Shigeo Takahashi, senior researcher at the institute.

TV footage showed tsunami causing the Natori River in Sendai to swell near its mouth and a wide, debris-clogged mass from the river rapidly swallowing up houses and buildings in residential areas and fields, leveling everything in its path and hitting boats, containers, vehicles and a massive amount of lumber.

At least two Japan Coast Guard patrol boats of the 2nd Coast Guard Regional Headquarters in Shiogama in the prefecture were washed away and a fishing boat with nine crew members was struck, coast guard officials said, without elaborating.

Other footage showed more than 20 cars and containers being washed into the sea when tsunami hit Kamaishi port.

The National Police Agency said the area of tsunami devastation in Iwate Prefecture has spread to include Kamaishi, Miyako and Iwaizumi, while quite a number of people have died or are missing in the coastal town of Yamada, where many homes were washed away.

The Fire and Disaster Management Agency said about 300 buildings were washed away by tsunami in Ofunato, Miyagi Prefecture.

The Sendai airport authority said the airport’s runways were submerged, while the Air Self-Defense Force said its Matsushima Air Base in Miyagi was completely submerged.

The Meteorological Agency warned of huge tsunami in the Pacific coastal region from Hokkaido to Tokushima Prefecture. It also advised residents in Pacific coastal areas to move to higher ground and stay away from the sea.

The agency called for the public to stay alert over the next month for aftershocks that could register a magnitude of 7 or more and trigger further tsunami. Friday’s temblor hit 7, the top of Japan’s seismic intensity.

The city of Soma said it has confirmed that tsunami have surged to around 4 to 5 km inland from the coast.

The Tokyo Metropolitan Government said it shut 19 of its floodgates to prepare for tsunami.

The Pacific Tsunami Warning Center in Hawaii said a tsunami warning was in effect for more than 30 countries and regions on the Pacific coast, including Russia, Taiwan, New Zealand, Chile, Marcus Island and the Northern Marianas, while weather agencies in the Philippines, Indonesia, Australia, Papua New Guinea, Mexico, Panama and Peru also issued similar warnings.

In addition to the U.S., 23 countries as well as Taiwan have offered to provide assistance to Japan, including the dispatch of rescue teams, and the provision of relief supplies and transportation, the foreign minister said.

Matsumoto said his ministry had confirmed that there was no major damage as a result of the powerful quake to foreign diplomatic missions in Japan, except for minor damage to the South Korean Consulate General in Sendai.

Some of the rail services in the Tokyo metropolitan area resumed Friday evening after being suspended for several hours following the earthquake.

Areas near stations in downtown Tokyo were swarming with people while many were facing difficulties due to mobile phone communication failures. Streets were jammed with people walking home.

East Japan Railway Co. suspended all services in the metropolitan area as well as bullet train services on the Tohoku, Joetsu, Nagano, Yamagata and Akita Shinkansen lines throughout Friday.

Chief Cabinet Secretary Yukio Edano asked people to hunker down somewhere safe, including office buildings, while calling on them not to try too hard to get home.

“We are calling for an early resumption of railway services, but it will not happen until safety is ensured,” Edano told a news conference. “If people try to go home by foot, in some cases pathways could be like fully packed trains.”

Large sections of highways in the Tokyo metropolitan area and the Tohoku region were closed after the quake.

A total of 711 flights were canceled at domestic airports, according to the Ministry of Land, Infrastructure, Transport and Tourism. About 13,000 people were stranded at Narita airport in Chiba Prefecture and 10,000 at Tokyo’s Haneda airport.

The government meanwhile called on 10 retailer associations to secure sufficient daily necessities and supply them smoothly to people in need.

The ministry also instructed organizations of small and midsize companies, including the Japan Chamber of Commerce and Industry, and public lenders, such as Japan Finance Corp., to set up ad hoc sections to deal with inquiries from smaller businesses in need of funds – Japantimes