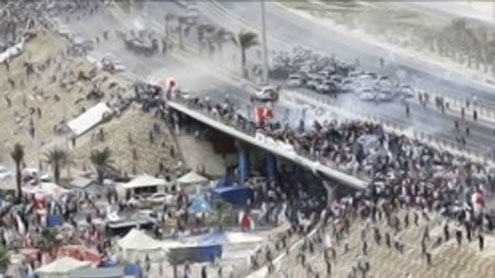 The Foreign Office (FCO) has warned Britons against all travel to Bahrain after clashes between police and anti-government protesters intensified.UK nationals in the Gulf state are advised to remain at home until further notice amid the continuing unrest.The FCO urged the authorities to “avoid the use of excessive force” and for all parties to exercise restraint.In a statement, it also said there were fresh reports that Saudi soldiers were about to enter the country.It said: “The risk of further outbreaks of violence has increased. If British nationals do travel within Bahrain, they should maintain a high level of security awareness, particularly in public places and on major highways, and avoid large crowds and demonstrations.“The airport remains open and transiting through the airport is unaffected by this advice.”The latest advice upgrades an FCO statement issued last month, which warned against all but essential travel.On Sunday, security forces fired tear gas and rubber bullets at demonstrators who had blocked off roads into the financial district of Bahrain’s capital Manama.Clashes were also reported in the city’s main square and university in some of the worst unrest for weeks.Protesters, inspired by the uprisings in Egypt and Tunisia, have called for the reform of the Sunni monarchy and have threatened to march on the royal palace if their demands are not met.Earlier this month, the FCO warned Britons against all travel to the Middle Eastern state of Yemen because of increasing violence.UK nationals already in Yemen without a pressing need to stay were advised to leave using commercial travel services – BBC

Babar lashes out at Nisar

Gilani to visit Kyrgyzstan on March 15

Gilani to visit Kyrgyzstan on March 15