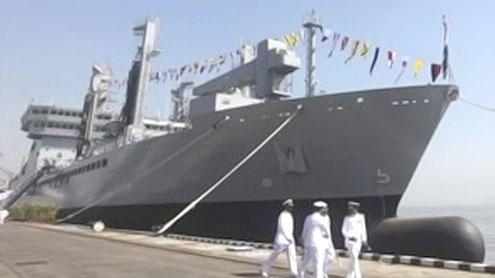 NEW DELHI: India has emerged as the largest arms importer in the world, overtaking even China, claims a report by a Swedish think-tank.The Stockholm International Peace Research Institute (Sipri), in its report to be released on Monday, said India accounted for 9% of all international arms imports between 2006-2010, making it the world`s largest weapons importer.China was relegated to second place, notching 6% of global arms imports, Siemon Wezeman of Sipri told international news agencies. The US remains the largest arms exporter, followed by Russia and Germany, as per the report.This is not the first time that India has topped such an international list. As reported by TOI earlier, US Congressional Research Service’s reports on conventional arms transfers placed India right at the top in 2004 and 2005, with agreements worth $5.7 billion and $5.4 billion respectively.

China, however, hides more than what it reveals. Beijing`s military expenditure figures as well as its acquisition of advanced weapon systems and platforms remain shrouded behind a thick iron curtain, which global monitors cannot penetrate easily.Unlike India, China has rapidly built a robust domestic defence-industrial base (DIB) over the last couple of decades, which often also revels in reverse-engineering top-of-the-line weapon systems developed by other countries.”China does spend staggering amounts in importing weapons from countries like Russia, often displacing even India as Russia`s largest defence customer,“ said an Indian defence official.If India`s defence budget for the coming fiscal is pegged at $36 billion, China is “officially“ going to spend $91.5 billion. Experts, however, reckon that it will spend almost twice the amount on its 2.5-million strong People`s Liberation Army.

But all this does not take away from the fact that India has certainly cranked up the modernization of its armed forces since the 1999 Kargil conflict, inking arms deals worth over $50 billion since then, the majority of them with foreign armament majors from Russia, Israel, France, UK and now, increasingly the US, as tracked by TOI.With limited private sector participation, coupled with DRDO, eight defence PSUs and 39 ordnance factories largely failing to deliver, India remains saddled with a poor DIB. So, with the armed forces continuing to import almost 70% of their requirements from abroad, India will remain a big time arms importer for the foreseeable future.There are several mega defence projects in the pipeline, which will see also tie-ups with foreign companies for technology transfer for indigenous production. The gigantic $10.4 billion project to acquire 126 medium multi-role combat aircraft, for instance, is in the final lap now, with commercial negotiations slated to soon begin with the eventual winner among the six aviation majors in contention.

Two major deals on the verge of being inked are the over $2.1 billion deal for the Mirage-2000 fighter upgrade with France and the $4.1-billion one for 10 C-17 Globemaster-III strategic airlift aircraft with the US. India, incidentally, is likely to order another six C-17s after the first 10.Then, the armed forces are looking to induct over 600 helicopters, ranging from VVIP and heavy-lift to attack and light utility ones, many of them from abroad, for well over Rs 20,000 crore.Navy, in turn, is all worked up about launching its Project-75India to acquire six new-generation stealth submarines as soon as possible. The submarines, equipped with tube-launched missiles for land-attack capabilities and air-independent propulsion (AIP) to enhance operational capabilities, will be built in a project worth over Rs 50,000 crore.The “granny“ of all defence projects will be the joint Indo-Russian project to develop the Sukhoi T-50 fifth-generation fighter aircraft. With IAF looking to induct 250 to 300 of these stealth fighters from 2020 onwards, India will eventually spend over $35 billion on this project alone – TOI