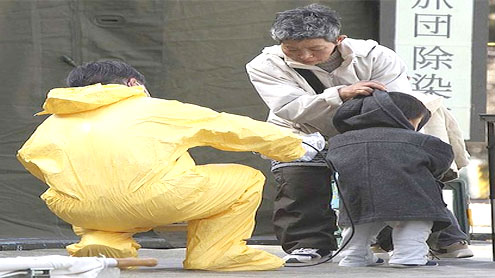 France’s ASN nuclear safety authority said on Monday the nuclear accident in Japan could be classed as level 5 or 6 on the international scale of 1 to 7, on a par with the 1979 U.S. Three Mile Island meltdown.The severity estimate, based on ASN’s assessment of data provided by Japan, is above the rating of four that Japan’s nuclear safety agency has given the accident at Tokyo Electric Power Co’s Fukushima Daiichi plant.

“Level four is a serious level,” ASN President Andre-Claude Lacoste told a news conference, but added: “We feel that we are at least at level five or even at level six.”France, the world’s most nuclear-dependant country, has 58 nuclear reactors that provide almost four-fifths of the country’s power, but Lacoste said it was extremely difficult to conceive of a similar disaster occurring in France.The ASN’s assessment of the accident in Japan also used information from foreign colleagues and “informal sources.””We are at the beginning of a crisis that could last for weeks,” Lacoste said.Japan is scrambling to avert a meltdown at the TEPCO plant after a hydrogen explosion at one reactor and exposure of fuel rods at another following a huge earthquake and tsunami that killed at least 10,000 people.The big fear now is of a major radiation leak.The head of France’s IRSN radiation protection and nuclear safety institution, Agnes Buzyn, said the situation at the Fukushima plant was getting worse but could still be reversed – Reuters