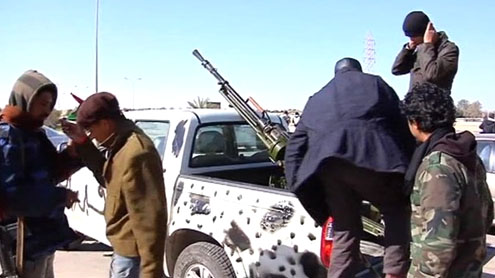 Heavy fighting has been continuing in Libya between government and rebel forces for the eastern town of Brega.The oil town has changed hands several times over recent days. Reports now suggest the rebels are losing control.In the west, government forces appear to have retaken Zuwara and are shelling Misrata city.Meanwhile, Britain and France tabled a draft resolution at the UN Security Council that would ban all flights over Libya to prevent Tripoli’s air attacks.However, there is still a lot of opposition, and not only from the Russians and Chinese, which traditionally oppose military intervention, the BBC’s Barbara Plett at the UN reports.Germany too has said there are many unanswered questions, and the Americans have not declared their position, our correspondent says.On Tuesday, Libyan government planes also bombed the outskirts of Ajdabiya, the last town before the rebel base in Benghazi in the east.

The sound of rocket fire has been getting louder in the town, while the frequency of ambulances and trucks bringing wounded to the main hospital has been increasing, AFP news agency reports.Libyan state TV says the government has gained control of the town, but this has not been independently verified, and reports suggest that fighting is continuing.Libyan leader Col Muammar Gaddafi addressed his supporters in Tripoli, describing the rebels as “rats”.In Brega, it seems rebel fighters have been hiding inside the oil installation in the daytime, in the belief that the government does not want to shell the facility, says the BBC’s Jon Leyne in Benghazi.Opposition sources are also saying there are divisions within the government ranks, with some troops apparently reluctant to fire on civilians, our correspondent adds.Meanwhile, a convoy of five civilian vehicles travelling to Brega is reported to have been attacked and a number of women and children were killed.A German writer and former member of parliament said he was driving near Brega when he was overtaken by the convoy. He later found the vehicles destroyed and everyone killed, and said he believed it was a ground attack using rocket-propelled grenades.

Meanwhile, it appears that government troops have taken over Zuwara, the last rebel town in the west, near the Tunisian border.A resident in Zuwara said security forces were trying to round up anyone suspected of links to the rebels.”They have lists of names and are looking for the rebels,” the resident told Reuters news agency. “They also took a number of rebels as hostages.”According to a report from Libyan state TV, an aircraft carrying people who it called “traitors” landed in an airport in Benghazi on Tuesday and stayed for about two hours.”It is thought that it had carried a number of leading traitors and agents,” the channel reported.The G8 group of foreign ministers, who met in France earlier on Tuesday, called on the UN to increase pressure on the Gaddafi regime.But despite recent talk of the imposition of a no-fly zone – an idea backed by France – the group made no mention of the prospect in its final communique.G8 foreign ministers “agreed that the UN Security Council should increase the pressure, including through economic measures, for Muammar Gaddafi to leave”, said the French minister, Alain Juppe.The Arab League has been pushing for a no-fly zone that would ground Libyan aircraft to protect people from assault by forces loyal to Col Gaddafi – BBC