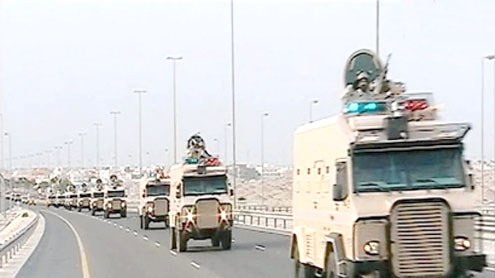 Few Washington policymakers had any illusions that the sense of new, if tentative, possibility that greeted the wave of pro-democracy popular uprisings in the Middle East would be free of complications, setbacks and risks.Still, Washington seemed taken by surprise as long-time ally Saudi Arabia sent 2,000 troops and the United Arab Emirates some 500 police into neighboring Bahrain Monday.The ostensible purpose of the deployments was to protect “critical infrastructure” amid swelling anti-government protests. Bahrain’s Sunni king further inflamed sectarian tensions there Tuesday, declaring a three-month state of emergency and authorizing security forces to take all necessary measures to quell anti-government protests.A leader of Bahrain’s largest Shiite opposition party, Wefaq, promptly condemned the declaration of martial law and foreign troop occupation, and called on the international community to intervene.

“The army is in control of society now,” Wafeq party politician Jasim Hussein told Reuters. “We condemn this and call on the international community to live up to its responsibilities.”Notably, the provocative moves by three close U.S. allies came just two days after Defense Secretary Robert Gates held meetings in Bahrain Saturday, in which he reportedly urged Bahrain’s leaders to open a dialogue with opposition groups. According to reports, Gates also gently admonished his audience for taking too modest “baby steps” toward political reform in the country, which is home to the U.S. Navy’s fifth fleet.As worrying for Washington, Riyadh’s insertion of troops into Bahrain came after Saudi leaders, citing Saudi King Abdullah’s poor health, declined a request for a meeting with him from Gates, who had been expected to travel to Saudi Arabia after Bahrain. Riyadh also reportedly declined a visit from Secretary of State Hillary Clinton, who is currently in Egypt.Analysts pointed to a growing rift between the U.S. urging Arab allies to undertake political and economic reforms to peacefully meet the demands of anti-government protesters, and Riyadh, which prefers the status quo.

“The Saudis were displeased with Obama’s stance on [former Egyptian president Hosni] Mubarak,” said Jane Kinnimont, a Persian Gulf expert with Chatham House. “They wanted the U.S. to continue the status quo. And they are concerned for what it means for them.””The U.S. view is that the solution to the problems of Bahrain depend on engaging seriously with the protesters and embarking on a program of political reform,” said Jon Alterman, a Middle East analyst at the Center for Strategic and International Security. “The view of some of the other [Gulf] states is disorder and chaos breeds chaos and disorder.””The U.S. views this as fundamentally political,” Alterman continued. “The Saudis view this as fundamentally material ” — about doling out more funds and other economic benefits to quell anti-government unrest.  “Bahrain has been trying to navigate between the two and not alienate its two most important allies,” Washington and Riyadh.Bahrain’s crown prince Salman bin Hamad bin Isa Al Khalifa, considered a moderate, “has been humiliated and crushed between hardliners [in his government] and an unresponsive opposition,” said another Washington Gulf analyst who spoke on condition of anonymity Monday because of his work in the region. “He did everything he could to jump-start dialogue with the opposition, although he may have been too shy, the intention was there to open a dialogue.”

“The Americans have been pretty clear in urging restraint,” against anti-government unrest, the analyst continued. “They don’t want the use of force [against the protesters]. The notion that Gates ‘gave the green light’ [to the Saudi troops entering Bahrain] is ludicrous. The Americans understand how the situation can backfire.”Asked about the Saudi troops moving into Bahrain Monday, the White House urged restraint, saying efforts to use force to suppress political dissent is counterproductive.”We have long believed, and the president has expressed for a long time now, that stability in the region will be brought about by dialogue and political reform,” White House spokesman Jay Carney said Monday.Â  “And it is counter-productive to that goal to in any way repress the expression of those desires that the people of Bahrain, in this case, and other countries, have.”Gulf experts said there were few signs that Riyadh was so convinced.”Every bordering country of Saudi Arabia is on fire,” the analyst said, noting escalating anti-government unrest not only in Bahrain, but also in Yemen as well as Oman. “The Saudis are anxious. And in fact, Saudi actions can be even worse than Iran interference because they will probably mess it up.”

Indeed, unconfirmed reports Tuesday citing a Saudi security official Tuesday said a Saudi soldier had been killed in anti-government protests in Bahrain, but the Saudi Press Agency later denied the report, citing the Saudi Defense Ministry. “Our men are not in combat mission, but they are working within the Peninsula Shield Forces to maintain the vital areas in the Kingdom of Bahrain,” the Saudi Press Agency said. Reports also said a Bahraini anti-government protester had been killed Tuesday.The tacit Arab rejection of Washington’s calls for political reforms also further complicate the already heated debate in Washington over a possible international military intervention to oust Libyan dictator Muammar Gadhafi.  The Arab League on Saturday called for a no fly zone to stop Gadhafi using airpower to advantage against anti-Gadhafi rebels. But the outcome of a UN Security Council debate of a possible no-fly zone resolution, expected to be introduced by Lebanon Tuesday, was still uncertain.

Though  France and the United Kingdom have urged international military action, warning against the dangers of leaving Gadhafi in power, Washington remains wary of embarking on another U.S. military intervention in the Middle East, even one carried out in cooperation with international allies that has the endorsement of the Arab League.”Getting the Arab League’s blessing is not enough,” said Mark Helmke, a spokesman for Sen. Richard Lugar (R-Indiana), the ranking Republican on the Senate Foreign Relations Committee, on Tuesday. “We don’t have the money to pay for it, and if it drags the U.S. into another war in the Middle East, we need a declaration of war.””Bahrain shows even more how complex the issue is, [and] that there are all sorts of unintended consequences,” Helmke added.The White House, for its part, stressed that while it finds the violence in Libya troubling in particular from a humanitarian perspective, it sees Egypt as the centerpiece of the changes underway in the Middle East and one that for now remains a mostly positive portent.”We’ll obviously deal with the crisis of the day,” National Security Advisor Tom Donilon told journalists last week. But “it’s important for us not to … lose sight of the fact that there are very big changes underway in places like Egypt, which really can make a historic difference depending on the direction in which they go – Yahoonews