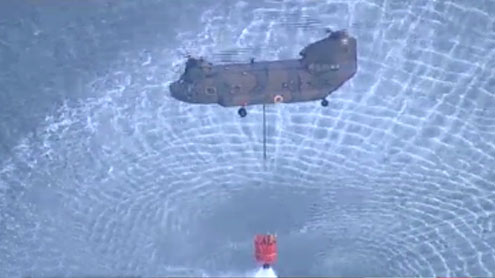 Japanese officials have deployed military helicopters to dump water over the earthquake-damaged Fukushima Daiichi nuclear power plant to try to cool down overheated reactors inside.The officials are trying to avert a catastrophic radiation leak from spent fuel rods inside the plant’s reactors. Japanese television Thursday morning showed helicopters dumping water over the plant from huge buckets.A top U.S. nuclear official says there is a significant risk of dangerous levels of radiation from the plant, which was damaged last week in a massive earthquake and resulting tsunami. U.S. Nuclear Regulatory Commission Chairman Gregory Jaczko told lawmakers in Washington Wednesday that cooling systems inside the plant have failed, making it very difficult to keep the fuel rods cool.In Vienna, the International Atomic Energy Agency said temperatures in three of the reactors at the Japanese plant have been rising.

It called the situation “very serious.”Nuclear fuel rods remain extremely hot for weeks or months, even when they are not in use. Without steady supplies of water to keep the fuel rods cool, their outer casings can melt and release large amounts of radiation into the atmosphere.At the time of the earthquake, only three reactors were in use at the plant. They were inside thick concrete-and-steel chambers designed to contain radiation, even if molten fuel rods melt down. Explosions have severely damaged the outer buildings of all three of the units.Elsewhere, the plight of thousands of people left homeless by the earthquake and tsunami has worsened after a cold snap brought snow to the worst-affect areas.  Officials report that supplies of water and heating oil are low at evacuation centers, where many survivors are bundled in blankets.Tens of thousands of households in northeastern Japan are still without electricity in near-freezing weather. The government says at least 1.5 million households in the area lack running water – Voanews