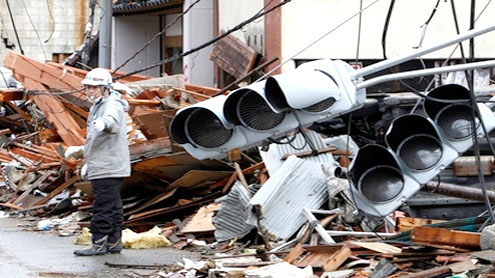 TOKYO: Australia, Britain and Germany advised their citizens in Japan to consider leaving Tokyo and earthquake-affected areas, joining a growing number of governments and businesses telling their people it may be safer elsewhere.The advisories came as the crisis at Japan’s Fukushima Dai-ichi nuclear plant in the northeast deepened in the wake of last week’s earthquake and ensuing tsunami.Australia’s Department of Foreign Affairs and Trade, however, said its advice to Australians had nothing to do with the threat of nuclear contamination from the damaged plant.”We are providing this advice because of the continuing disruption to major infrastructure, its impact on the welfare of people on the ground and continuing aftershocks,” its notice said.

Tokyo, which is about 140 miles (220 kilometers) south of the stricken nuclear complex, reported slightly elevated radiation levels Tuesday. Officials said the increase was too small to threaten the 39 million people in and around the capital, but some countries have relocated their embassies or suggested their citizens leave the area.Germany’s Foreign Ministry advised its citizens living near the nuclear plant or in the capital region to either leave the country or move to the Osaka area west of Tokyo.Ministry spokesman Andreas Peschke said an estimated 5,000 Germans were in Japan before the earthquake, but now only about 1,000 are believed to remain in and around the capital. Germany’s embassy in Tokyo also has been “partly relocated” to the consulate general in Osaka, Peschke said.Britain’s Foreign & Commonwealth Office advised against all nonessential travel to Tokyo and northeastern Japan, and urged British citizens within that zone to consider leaving.France has urged its citizens with no reason to stay in Tokyo return to France or head to southern Japan. The government has asked Air France to mobilize aircraft in Asia to assist with departures.Serbia and Croatia advised their citizens to leave Japan, while Croatia said it was moving its embassy from Tokyo to Osaka because of the nuclear crisis.

More than 3,000 Chinese have already been evacuated from Japan’s northeast to Niigata on Japan’s western coast, according to Xinhua News Agency. On Tuesday, Beijing became the first government to organize a mass evacuation of its citizens from the quake-affected area.Other governments, including the U.S., are taking a more measured approach.The White House recommended Wednesday that U.S. citizens stay 50 miles (80 kilometers) away from the stricken nuclear plant, not the 20-mile (32 kilometer) radius recommended by the Japanese.The order came after President Barack Obama met with top advisers and the chairman of the Nuclear Regulatory Commission. As late as Tuesday, the U.S. had not issued its own recommendations, advising citizens instead to follow the recommendations of the Japanese.The Philippine Embassy in Tokyo told its citizens to follow advisories issued by Japanese authorities. It added, however, that Filipinos who are concerned about possible radiation exposure “may wish to voluntary relocate to areas further away, or depart voluntarily from the country using their own means.”If relocation and repatriation become necessary, the Philippine government will defray the costs involved, the Department of Foreign Affairs said in a statement.An Indian software services company, L&T Infotech, on Wednesday ordered the temporary evacuation of 185 employees and their family members from Japan. It said in a release that it had chartered a special Kingfisher Airlines flight that will depart Friday to Chennai, India.Cirque du Soleil has also decided to move its performers and staff working in Japan to Macau, spokeswoman Chantal Cote said in an e-mail. Its show “ZED” is based at Tokyo Disneyland, and the touring “KOOZA” show was performing at the Fuji Dome in Tokyo – Yahoonews