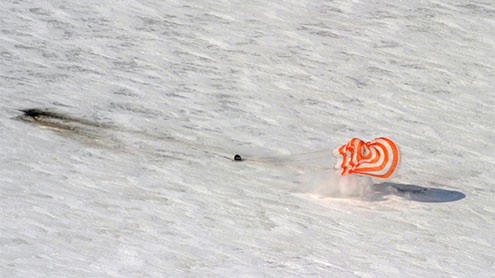 ALMATY, Kazakhstan: NASA astronaut Scott Kelly and two Russian cosmonauts landed safely Wednesday in the snowy expanses of central Kazakhstan after spending five months on the International Space Station.The Soyuz capsule carrying Kelly, Alexander Kaleri and Oleg Skripochka landed at 1:53 p.m. (0753 GMT) about 50 kilometers (30 miles) from the northern Kazakh city of Arkalyk.Kelly returns to earth just as his twin brother Mark, husband of wounded congresswoman Gabrielle Giffords, prepares to take part in the U.S. space shuttle Endeavour’s final mission in April. Scott Kelly was shown in a NASA photo wearing a blue wristband with a peace sign, a heart and the name “Gabby.”The capsule came back to harsh conditions, including a stiff wind that blew it on its side and rolled it 22 meters (25 yards) from its touchdown point through fresh snow.Rob Navias, a spokesman for the U.S. space agency NASA on the scene, described conditions as “like a scene from the North Pole.”

The space travelers were bundled into blankets after being pulled from the capsule, then placed in reclining stretchers as they slowly acclimated to the planet’s gravity after months of weightlessness.The capsule landed about 3 1/2 hours after undocking from the ISS. After hurtling through space, it deployed a parachute about 15 minutes before touchdown, slowing its speed from 800 kph (500 mph) to about 290 kph (180 mph).A second parachute slowed its descent to 25 kph (16 mph). Then with the ground just a few meters (yards) away, six engines on the capsule’s bottom were fired, bringing it to a gentle landing in a powdery cloud of fresh snow.The first out was Kaleri, who has now spent a total of 770 days in space over five flights, making him the second most experienced space flier in history after compatriot Sergei Krikalyov. Navias said Kaleri smiled and winked at him as he was lifted out.

Skripochka and Kelly also appeared to be in good shape.”Scott Kelly is looking remarkably well,” Navias said.In a break with usual practice, search-and-recovery personnel dispensed with the ritual of taking the returning astronauts to inflatable medical tents for a checkup and instead loaded them directly onto all-terrain vehicles.”The search and recovery team have decided it’s too cold, it’s too wintery, it’s too Arctic out here in terms of the overall conditions,” Navias said.During his time on the space station, Kelly ran a series of challenges on his Twitter feed in which his followers had to identify locations on earth shown in photographs taken from the orbiting laboratory.The final photo posted was of snow-covered Kazakhstan.Russian Dmitry Kondratyev, Italy’s Paolo Nespoli and American Catherine Coleman remain aboard the space station; they are to return to earth in about three months – Yahoonews