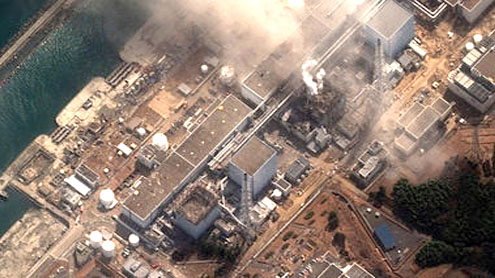 Engineers at Japan’s stricken Fukushima nuclear power plant have managed to lay a cable to reactor 2, the UN’s nuclear watchdog reports.Restoring power should enable engineers to restart the pumps which send coolant over the reactor.Workers at Fukushima have been battling to prevent fuel in the reactors from overheating since Friday’s magnitude 9.0 quake and subsequent tsunami.The confirmed death toll from the disaster has risen above 5,600.More than 9,500 people are missing and tens of thousands of people are living in temporary shelters.US President Barack Obama has said he is confident the “strong, resilient” people of Japan will recover from the crisis and that the country will emerge stronger than before.The atomic crisis was triggered when the power supply to Fukushima was damaged by the natural disaster and back-up generators failed.The Tokyo Electric Power Company (Tepco), which runs the plant, has been attempting to connect it to the main grid via a 1-km (0.6-mile) electricity cable.

Once power is restored, engineers should be able to re-activate the pumps which send coolant through the reactors and the pools where spent fuel rods are stored.The International Atomic Energy Agency (IAEA) said the cable had reached the site by 1730 local time (0830 GMT) on Thursday, and that engineers planned to reconnect power to the reactor once workers have finished spraying seawater over reactor 3.Tepco warned the process of reconnecting power could take up to 15 hours.Helicopters and water cannon have been dumping seawater over the Fukushima reactors, to try to prevent fuel rods melting.Video footage had suggested most of the water had been falling outside the target buildings, but a Tepco spokesman said it appeared the operation had had some success.”When we poured water, we monitored steam rising from the facility. By pouring water, we believe the water turned down the heat. We believe that there was a certain effect,” he said.Another spokesman said on Thursday that aerial observations of reactor 4 indicated it did contain some water.”We have not confirmed how much water was left inside but we have not had information that spent fuel rods are exposed,” he said.Earlier, senior IAEA official Andrew Graham said the situation at Fukushima had not deteriorated, but could yet do so. He described the situation at “reasonably stable”.

The head of the IAEA, Yukiya Amano, is heading to Tokyo to be briefed by Japanese officials.Japan has imposed a 20-km (12-mile) exclusion zone around Fukushima and has urged people living up to 30km away to stay indoors. Some countries have advised their nationals in Japan to stay up to 50km away.Tens of thousands of people are still struggling with the after effects of last Friday’s massive quake, which triggered a tsunami that swept away whole towns in minutes.In areas of the north-east badly hit by the tsunami, bitter winter weather has added to the misery of survivors, though more supplies are now reported to be reaching them.Japan’s Kyodo news agency quoted rescuers as saying that the search for victims had expanded over a wider area as access had improved with the clearance of debris.The number of people now known to have died in the twin disaster stands at 5,692 with 9,506 people listed as missing.But Kyodo reports that the official toll is based on names registered with police, and that the true figure could be in the tens of thousands.About 380,000 people are currently still in temporary shelters, many sleeping on the floor of school gymnasiums.Many foreign countries are evacuating their nationals from northeast Japan, or advising them to leave the country entirely.The crisis has also continued to affect the markets – the benchmark Nikkei index fell 3.6% in early Thursday trading in Tokyo, shortly after the yen briefly hit the highest level against the US dollar since World War II – BBC