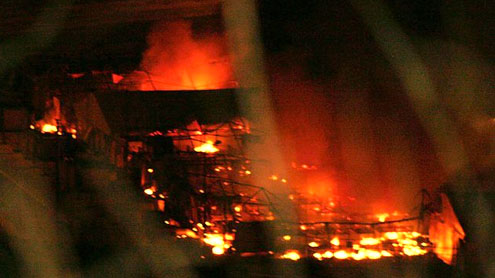 Australia: More than 200 rioters torched buildings and tried to escape a crowded Australian offshore detention center in an escalation of protests there to gain asylum in the country, officials said Friday.More than 100 police firing non-lethal so-called bean bag rounds and tear gas canisters regained control over the detention center on Christmas Island after the riot started Thursday night, Immigration Minister Chris Bowen said.Two administration buildings were burned as well as seven accommodation tents after more than 200 asylum seekers armed with bricks and polls and throwing rocks charged police and the perimeter fences, Australian Federal Police Deputy Commissioner Steve Lancaster said.Some rioters breached the perimeter wall and police were not yet sure whether all had been recaptured, he said.

Two asylum seekers were taken to hospital, one with chest injuries and another suffering chest pains, Immigration Department official Sandi Logan said.The riot follows a week of sometimes violent protests at immigration detention centers on the Indian Ocean island and on the Australian mainland over delays in processing asylum applications. Authorities are struggling to cope with increasing numbers of asylum seekers from Afghanistan, Iraq, Iran and Sri Lanka who attempt to reach Australia by boat.”A small group of detainees have made it clear that they would continue violent action until they were granted visas,” Bowen told reporters.”We don’t let that sort of behavior influence our consideration of visa applications,” he added.

Authorities were responding to the riots by accelerating plans to relocate hundreds of the 2,500 detainees on Christmas Island to mainland detention centers to reduce crowding and by bringing in police reinforcements.A total of 105 detainees, none of whom was involved in the fracas, were flown from the island Friday, while 70 police were flown in, bringing total police strength to 188.”This is a very tense and serious situation,” Bowen said.Police would investigate charging the rioters. Bowen warned that the culprits could fail their refugee test on character grounds.An asylum seeker broke his leg in another Christmas Island protest this week that police quelled.The detainees include asylum seekers whose refugee applications have yet to be judged, those who have had their applications rejected but refuse to return to their homelands and those who have been accepted as refugees but are pending security clearances before they are freed in Australia.Human Rights Commissioner Catherine Branson, the federal government’s rights watchdog, is concerned about processing delays which have left most of the 6,500 asylum seekers currently in Australia in detention for more than six months – Yahoonews