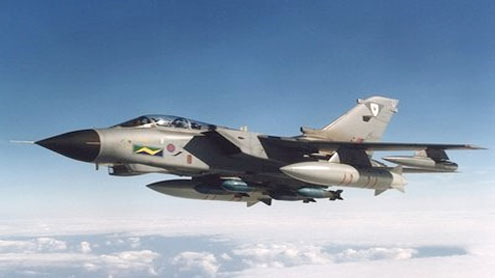 LONDON: Britain and France took the lead in plans to enforce a no-fly zone over Libya on Friday, sending British warplanes to the Mediterranean and announcing a crisis summit in Paris with the U.N. and Arab allies.France said it was ready for possible military action, but with Libya declaring a cease-fire and the United States keeping quiet about its own military role, questions remained about when any action would come — and what its consequences would be.In a joint statement to Gadhafi late Friday, the United States, Britain and France — backed by unspecified Arab countries — said a cease-fire must begin “immediately” in Libya, the French presidential palace said.The statement called on Gadhafi to end his troops’ advance toward Benghazi, and pull them out of Misrata, Adjadbiya and Zawiya, and called for the restoration of water, electricity and gas services in all areas. It said Libya’s population must be able to receive humanitarian aid.

“This is not negotiable,” the statement said.In Tripoli, Libya’s deputy foreign minister, Khaled Kaim, invited invited Germany, China, Turkey and Malta to send observers to monitor the cease-fire, which he said was holding. “The cease-fire for us means no military operations whatsoever, big or small,” he told reporters.Prime Minister David Cameron, one of the most enthusiastic backers of a no-fly zone, said Britain would send Typhoon and Tornado fighter jets to air bases “in the coming hours” so they would be in position to stop Moammar Gadhafi’s forces mounting air strikes against rebels based in the eastern city of Benghazi.”The clock is ticking and we must be ready to act quickly,” Cameron said, adding that Gadhafi must prove he was serious about a cease-fire to avoid military strikes.The United States has a host of forces and ships in the region, including submarines, destroyers, amphibious assault and landing ships with some 400 Marines, but U.S. officials have not said what role American participation will take.

U.S. Secretary of State Hillary Rodham Clinton said the United States must see “action on the ground,” not just words, on a cease-fire.In a brief appearance at the White House, U.S. President Barack Obama made no reference to Libya’s declaration of an immediate cease-fire on Friday. Instead, he listed a series of demands including a halt to all attacks against civilians, a stop to military action against Benghazi and other cities and permission for humanitarian supplies to reach the civilian population of the country.”Let me be clear, these terms are not negotiable,” Obama said.British defense analyst Charles Heyman said the Americans will have the bulk of the military responsibility.”It’s easy for the British and the French to talk a lot about it when they actually don’t have all the right equipment to maintain a no-fly zone on their own,” Heyman said.Britain, France and NATO were holding emergency meetings Friday on using military force to enforce the no-fly zone, which was approved by U.N. Security Council on Thursday.

French Foreign Minister Alain Juppe said “everything is ready” for action, but added that “we have to analyze the conditions of the cease-fire.”NATO Secretary-General Anders Fogh Rasmussen said NATO was “completing its planning to be ready to take appropriate action in support of the U.N. resolution as part of the broad international effort.”French government spokesman Francois Baroin would not comment on “where, how, what target, or in what form” air strikes against Libyan installations would come.Officials announced that the leaders of Britain, France and Germany and the chiefs of the United Nations and Arab League would join other world leaders for an emergency summit on Libya in Paris Saturday.U.N. Secretary General Ban Ki-moon said “it is imperative that the international community continues to speak with one voice” on Libya.As well as Britain and France, Denmark and Canada said they would supply fighter jets for the mission. Italy and Spain said they would make their air bases available.Diplomats have said Arab countries likely to participate in possible strikes include Saudi Arabia, Qatar, the United Arab Emirates and Jordan.

After the U.N. resolution, Obama spoke with Cameron and Sarkozy to coordinate further action. The White House said in a statement that “that Libya must immediately comply with all terms of the resolution and that violence against the civilian population of Libya must cease.”NATO surveillance AWACS planes flying off the Libyan coast are already providing 24-hour coverage of the situation in the air and on the battlefields . Analysts said no-fly zone aircraft would be flying from NATO bases such as in Sigonella, Sicily, Aviano in northern Italy, Istres in southern France, and Ventiseri-Solenzara in Corsica.The North Atlantic Council, NATO’s top decision-making body, decided Friday to speed up planning and will meet again in the next few days when plans are complete, an alliance spokeswoman said, speaking on condition of anonymity because of the delicacy of the situation.Envoys said there was no discussion at the NATO meeting of any air strikes against targets in Libya.”I do not expect any such action in the next few hours or next few days,” said Martin Povejsil, the Czech Republic’s NATO envoy.Even as allies made plans for military intervention, Libya’s cease-fire was forcing a reassessment of the situation.”Along with our colleagues we’re looking at the details of that,” the EU’s high representative for foreign affairs, Catherine Ashton, said of the cease-fire, adding that it was unclear what Libyan Foreign Minister Moussa Koussa’s announcements in Tripoli meant in practice.Chancellor Angela Merkel of Germany — which abstained from the Security Council vote — said the international community would monitor closely to make sure the cease-fire announcement is not a ruse.”The international community stands together and there are already encouraging reports that Gadhafi is reacting to the resolution,” Merkel told reporters in Berlin.French Foreign Ministry spokesman Bernard Valero was more skeptical.”Mr. Gadhafi has declared a cease-fire but you know, he’s made so many declarations — each one more exotic than the last, each one more frightening than the last over the last week,” he told AP Television News. “This man’s credibility is gone, no one can trust him.”Valero said the “coalition of the willing” must “prepare ourselves to disable him from massacring his own people.”Military experts cautioned that the consequences of a no-fly zone are unpredictable. The former head of the British army, Richard Dannatt, said Friday it was crucial to proceed cautiously “so we don’t get into the kind of situation that we got into in Iraq by not having a Plan B for the morning after.”

Barak Seener, Middle East research fellow at Britain’s Royal United Services Institute, said any actions taken by Western powers would have fewer casualties than Gadhafi’s assault.”The Gadhafi regime is indiscriminately slaughtering civilians, and they’re not having precision strikes against rebels,” Seener noted.There are also mixed messages about the ultimate ambition of a no-fly zone. Cameron insisted the aim is saving lives, not regime change, but Clinton said the goal remained to get rid of Gadhafi.Oliver Miles, a former British ambassador to Libya, said getting rid of Gadhafi left “the question of what takes his place.””What they (the Libyans) lack is any structures — Gadhafi has deliberately destroyed them,” he said. “There is no civil society, there are no parties – Yahoonews