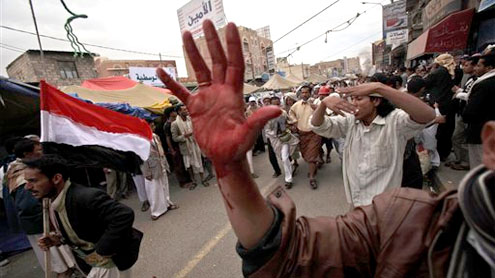 en: A massive demonstration against Yemen’s government turned into a killing field Friday as snipers methodically fired down on protesters from rooftops and police made a wall of fire with tires and gasoline, blocking a key escape route.At least 46 people died, including some children, in an attack that marked a new level of brutality in President Ali Abdullah Saleh’s crackdown on dissent.

Medical officials and witnesses said hundreds were wounded.The dramatic escalation in violence suggested Saleh was growing more fearful that the unprecedented street protests over the past month, set off by unrest across the Arab world, could unravel his 32-year grip on power in this volatile, impoverished and gun-saturated nation. The United States, which has long relied on Saleh for help fighting terrorism, condemned the violence.The bloodshed, however, failed to dislodge protesters from a large traffic circle they have dubbed “Taghyir Square” — Arabic for “Change.” Hours after the shooting, thousands demanding Saleh’s ouster stood their ground, many of them hurling stones at security troops and braving live fire and tear gas.

They stormed several buildings where the snipers had taken position, dragging out 10 people — including some the protesters claimed were paid thugs. They said the men would be handed over to judicial authorities.The protest in the capital, Sanaa, drew tens of thousands, the largest crowd yet in Yemen’s uprising. It began peacefully. A military helicopter flew low over the square just as protesters were arriving after the main Muslim prayer services of the week.A short while later, gunfire rang out from rooftops and houses, sending the crowd into a panic. Dozens were hit and crumpled to the ground. One man ran for help cradling a young boy shot in the head.Many of the victims were shot in the head and neck, their bodies left sprawled on the ground or carried off by other protesters desperately pressing scarves to wounds to try to stop the bleeding.Police used burning tires and gasoline to block demonstrators from fleeing down a main road leading to sensitive locations, including the president’s residence.”It is a massacre,” said Mohammad al-Sabri, an opposition spokesman. “This is part of a criminal plan to kill off the protesters, and the president and his relatives are responsible for the bloodshed in Yemen today.”

Witnesses said the snipers wore the beige uniforms of Yemen’s elite forces and that others were plainclothes security officers. President Saleh denied at a press conference that government forces were involved, claiming that residents angry over the expanding protest camp had opened fire. He ordered the formation of a committee to investigate.Doctors at a makeshift field hospital near the protest camp at Sanaa University confirmed at least 46 dead, three of them children. They spoke on condition of anonymity because they were not authorized to speak to the media.A Yemeni photojournalist, Jamal al-Sharaabi, was among the dead, medical officials said. He is the first journalist killed in the unrest.Interior Minister Gen. Mouthar al-Masri, who is in charge of internal security forces, put the number of dead at 25 and the injured at 200.Opposition groups in Yemen held an emergency meeting later Friday in which they defiantly called on all Yemenis to join in their peaceful protest. The groups denounced Friday’s violence, which they said was ordered by Saleh. They also called on the international community and U.N. Security Council to take “political and moral responsibility with measures to protect civilians.”

The United States, which supports Yemen’s government with $250 million in military aid this year alone to battle one of al-Qaida’s most active franchises, condemned the attack on protesters.”Those responsible for today’s violence must be held accountable,” President Barack Obama said. He called on Saleh to adhere to his public pledge to allow peaceful demonstrations.Instead, Saleh declared a 30-day nationwide state of emergency that formally gave his security forces a freer hand to confront demonstrators. The declaration bars citizens from carrying and using weapons.U.N. Secretary-General Ban Ki-moon was “deeply troubled,” said his spokesman, Martin Nesirky. He “reiterates his call for utmost restraint and reminds the government of Yemen that it has an obligation to protect civilians.”Demonstrators are demanding jobs, greater political freedoms and an end to government corruption.In the latest defection by a political ally of the president, Nabil al-Faqih, the Yemeni tourism minister, resigned Friday from his Cabinet position and from the ruling party to protest the killings.

“This is the least I can do,” he said. Al-Faqih is the second minister to quit and the latest of several politicians to resign from Saleh’s Congress Party.Throughout the unrest, security forces and government supporters have used live fire, rubber bullets, tear gas, sticks, knives and rocks against the protesters, who have only grown in number in Sanaa and in many other cities around the nation. The protesters say they won’t go until Saleh does and have rejected offers to discuss a unity government.”They want to scare and terrorize us. They want to drag us into a cycle of violence — to make the revolution meaningless,” said Jamal Anaam, a 40-year-old activist camping out in the protest site.He said government opponents would not follow the example of their counterparts in Libya who took up arms against Col. Moammar Gadhafi. “They want to repeat the Libyan experiment, but we refuse to be dragged into violence no matter what the price,” he said.Friday’s violence showed the government of Saleh and his family are increasingly worried about losing power, said Gregory Johnsen, an expert on Yemen at Princeton University.

“He has been in power for more than three decades and he’s falling back on what he knows best, which is increasingly violent methods.”The tactic is unlikely to work, he predicted.”Yemen does not have a population that’s easily cowed, so I don’t think they will be put out by fear of death,” he said. “It’s a heavily armed country. Many of the people there are quite confident and capable of putting security into their own hands.”Saleh and his weak government have faced down many serious challenges, often forging tricky alliances with restive tribes to delicately extend power beyond the capital. Most recently, he has battled an on-and-off, seven-year armed rebellion in the north, a secessionist movement in the south, and an al-Qaida offshoot that is of great concern to the U.S.Al-Qaida in the Arabian Peninsula, which formed in January 2009, has moved beyond regional aims and attacked the West, including sending a suicide bomber who came terrifyingly close to blowing up a U.S.-bound airliner with a bomb sewn into his underwear. The device failed to detonate properly.Yemen is also home to U.S.-born radical cleric Anwar al-Awlaki, who is believed to have offered inspiration to those attacking the U.S – Yahoonews