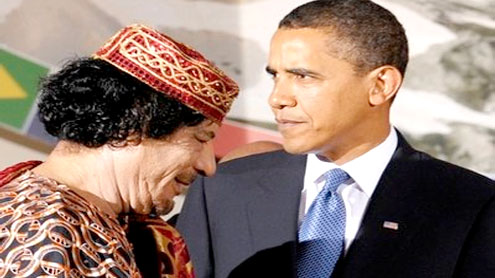 WASHINGTON: After weeks of hesitation and divisions among his advisers, President Barack Obama on Friday endorsed military action against Libya’s Moammar Gadhafi, saying U.S. values and credibility are at stake to stop “the potential for mass murder” of innocents.The U.S. military, which is already stretched thin by two wars and an expanding effort to assist disaster victims in Japan, would take a supporting role, Obama said, with European and Arab partners in the lead. He explicitly ruled out sending American ground forces into the North African nation.A wide range of U.S. firepower stood ready, including Navy ships and submarines capable of launching Tomahawk cruise missiles with high-explosive warheads that could destroy air defense sites and other potential targets in the earliest stages of any allied military action.In solemn remarks at the White House, Obama never used the word “war,” but that is what U.S. forces could face if Gadhafi refuses to comply with United Nations demands. It is widely anticipated that a first step in imposing a no-fly zone over Libya — a tactic aimed at keeping Gadhafi’s planes from attacking — would be assaults on the country’s coastal air defenses.

Obama offered a string of reasons for committing to military action.”Left unchecked, we have every reason to believe that Gadhafi would commit atrocities against his people,” he said. “Many thousands could die. A humanitarian crisis would ensue. The entire region could be destabilized, endangering many of our allies and partners. The calls of the Libyan people for help would go unanswered. The democratic values that we stand for would be overrun.”That marked a major shift from the public caution expressed until recent days by Obama’s top national security advisers, Defense Secretary Robert Gates, Secretary of State Hillary Rodham Clinton and the chairman of the joint Chiefs of Staff, Adm. Mike Mullen. All had said that a no-fly zone or other military action would be a difficult undertaking tantamount to war, or that it could have unintended consequences.European leaders have been keen to show support for the Libyan rebels, but the United States had hung back until this week.

The administration was divided for weeks over how to address the situation in Libya, which differed from other Arab revolts when it moved from a political uprising to an armed insurrection against a strongman.Military leaders were most cautious, arguing that a rush to show solidarity with the rebels might be shortsighted. Clinton and some other top diplomats were in the middle, with some White House advisers and U.N. Ambassador Susan Rice apparently most ready to back the use of force.In remarks to Congress earlier this month, Gates spoke skeptically of the wisdom of military intervention in Libya. He argued that because imposition of a no-fly zone would require attacks first on Libyan air defenses, the operation would be tantamount to going to war.The Gates view seemed to resonate in the administration until the Arab League last weekend called for U.S. authorization of a no-fly zone. At that point the prevailing U.S. sentiment seemed to shift in favor of pressing for a U.N. Security Council resolution and subsequently giving Gadhafi an ultimatum.

Obama said he was dispatching Clinton to Paris for a meeting Saturday to discuss with British, French and other partner countries the next steps in Libya. The president said he directed Gates to coordinate military planning, which has been in the works for weeks while the administration pondered the ramifications of getting involved militarily while also fighting wars in Iraq and Afghanistan.The president made no reference to a Libya’s declaration of an immediate cease-fire on Friday — a statement that a rebel spokesman said was fiction.Instead, Obama listed a series of demands for Gadhafi, including the halting of all attacks against civilians, a stop to military action against the rebel-controlled city of Benghazi and other cities and permission for international humanitarian supplies to reach civilians displaced by the violence.”Let me be clear, these terms are not negotiable,” he said.The president was equally clear that the U.S. would not act alone.

“American leadership is essential, but that does not mean acting alone — it means shaping the conditions for the international community to act together,” he said.Even more explicitly: “We will provide the unique capabilities that we can bring to bear to stop the violence against civilians, including enabling our European allies and Arab partners to effectively enforce a no-fly zone.” He seemed to verbally underline the word “enabling,” to emphasize the U.S. support role.Analysts say Libya’s air force and air defense systems, while not negligible, are decrepit by Western standards and unlikely to stand up to assault.Defense analysts said Libya’s military has been weakened by years of neglect, armed with outdated aircraft and weapons, and directed by a radar and communications system that may have limited capabilities.They cautioned, however, that it is difficult to give an exact assessment of Libya’s military abilities, particularly in the wake of the recent uprising that saw some troops defecting and taking their weapons and aircraft with them.

An assessment prepared by the Congressional Research Service this week said greater worries could come after a no-fly-zone was in effect and the U.S. and its allies had to deal with a heavily armed populace in disarray.”The apparent proliferation of small arms, man-portable air defense missile systems, and some heavy weaponry among fighters on both sides also is leading some outside counterterrorism and arms trafficking experts to express concern about the conflict’s longer term implications for regional security,” the new report said.The uprising against Gadhafi is only one of many struggles being played out in the region as long-time autocratic regimes come under pressure. Protests in Tunisia and Egypt have led to the ouster of long-time rulers, and there have been demonstrations in Yemen, Jordan and Bahrain. Protests erupted in at least three parts of Syria during the day Friday, according to state television and other sourceBefore his public announcement that U.S. forces would join in military action against Libya, Obama met at the White House with congressional leaders of both parties to discuss his thinking.”The U.S. military will be playing a supportive role in this action. We will not have troops on the ground; instead we are providing strategic support where we have unique capabilities to the Arab and European nations that are taking the lead,” said Rep. Howard Berman, D-Calif., the top Democrat on the Foreign Affairs Committee. He took part in the Obama session by telephone.

Speaking earlier, Sen. Lindsey Graham, R-S.C., said he believes Obama has authority to commit U.S. forces to participate in imposing a no-fly zone without congressional approval, but he expressed hope that Congress would bless the move.If the U.S. military is ordered to establish a no-fly zone, a wide variety of high-tech weapons and aircraft would be sent from bases in Europe and the United States to shut down or disrupt Libya’s Soviet-era air defense systems and its communications networks, Air Force Chief of Staff Gen. Norton Schwartz told Congress Thursday.He said it would take about a week to establish the no-fly zone. If such a mission is ordered, he said, he expected the supersonic F-22 Raptor — a jet fighter yet to be used in combat — to play a prominent role in the initial wave. With its stealth design, the F-22 can evade radar and has advanced engines that allow it to fly at faster-than-sound speeds without using gas-guzzling afterburners.Other fighters, such as the F-15 and F-16, would also be used, as would bombers, airlifters, refueling tankers and highly specialized aircraft such as the RC-135 Rivet Joint and the EC-130H Compass Call. The Rivet Joint is loaded with sophisticated intelligence gathering gear that allows the U.S. to spy on the enemy from the air. The Compass Call is an electronic warfare plane that disrupts an adversary’s communications – Yahoonews