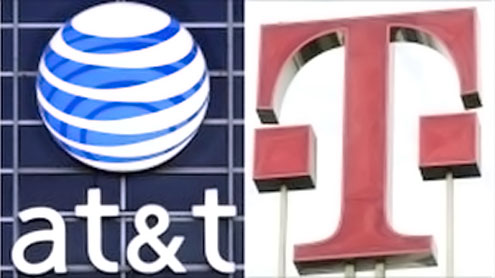 AT&T said it will buy rival T-Mobile USA from Deutsche Telekom AG for $39bn (£24bn) making it the largest mobile phone company in the US.The deal would give AT&T about 43% market share, putting it well ahead of industry leader Verizon Wireless.T-Mobile customers will get access to AT&T’s phone lineup, including the iPhone.The deal would reduce competition in the US mobile phone industry and needs approval from regulators.AT&T is looking to increase its network capacity to handle the rapidly increasing consumer demand for videos and data.

However, analysts said that the deal may prove controversial.Consumer rights group Public Knowledge said that the deal would lead to “higher prices, fewer choices, less innovation”.The phone companies countered that the US market was competitive and call prices had declined in recent years as a result.AT&T said regulators may ask it to sell some assets as a condition for approval.It said it expects the deal to be completed in 12 months.AT&T Chief Executive Randall Stephenson told reporters the company had done its ‘homework’ on the regulatory side of things.He said the deal could generate savings of more than $40bn.”This is a unique opportunity. It’s rare you have transactions where the synergies are greater than the price paid,” Mr Stephenson said – BBC