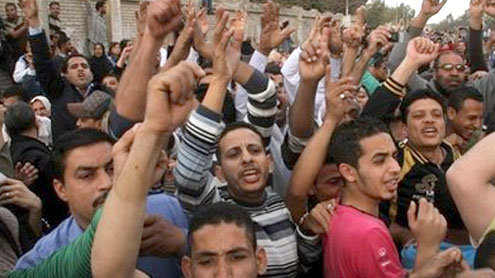 CAIRO: Egyptian voters overwhelmingly approved changes in the constitution, opening the way for parliamentary and presidential elections within months, according to final results from a landmark referendum announced Sunday. Opponents fear the swift timetable could boost the fundamentalist Muslim Brotherhood and members of the former ruling party.The Brotherhood had campaigned heavily for a “yes” vote in the referendum. Critics say that since it and the former ruling party are the best organized political forces in the country, they stand to gain the most in an early election — which will bring in Egypt’s first democratically elected government to replace the regime of ousted President Hosni Mubarak.The results are likely to open a frenzied campaign season, with liberal pro-democracy forces scrambling to put together political parties to contest the upcoming races.

Shady Ghazali, one of the organizers of the protests that forced Mubarak out after 18 days, said the youth coalition that led the demonstrations is discussing putting forward a national list of candidates for the parliamentary elections under its name.The parliamentary and presidential elections are key because the next legislature and government are to lead the process of wider change, including likely drawing up a new constitution. Many of those who led the wave of popular protests that ousted Mubarak on Feb. 11 want a radically new document that would break the total hold that the presidency held over government during Mubarak’s rule. They worry that the Brotherhood or former ruling party could dominate the process.In an interview with daily El-Shorouk, a top member of the Supreme Council of the Armed Forces said that the council will issue “a constitutional declaration” right after the announcement of the final vote to lay down next steps, with approval leading to a timetable for parliament and presidential elections.

Elections commission chief Ahmed Attiya said 41 percent of 45 million eligible voters cast ballots in Saturday’s referendum. More than 14 million — 77.2 percent — voted in favor, with around 4 million — 22.8 percent — opposed.Millions of Egyptians waited for hours Saturday to cast their first free ballots in half a century on the package of constitutional changes. The first test of Egypt’s transition to democracy also offered ominous hints of widening sectarian division.Many were drawn to the polls in a massive, last-minute effort by the Muslim Brotherhood.Among those most fearful of the Brotherhood’s rising power were Egypt’s estimated 8 million Coptic Christians, whose leaders rallied the faithful to vote “no.”Reform campaigner Mohamed ElBaradei and a group of his supporters were pelted with rocks, bottles and cans outside a polling center at Cairo’s Mokattam district in an attack he blamed on followers of the old regime.The day was otherwise almost entirely peaceful.Hundreds of Egyptians formed lines outside polling centers before they opened. They snaked along the streets in Cairo and other cities, with men and women standing in separate lines as is customary in the conservative and mainly Muslim nation.

Saturday’s vote was by far the freest since the military seized power in a 1952 coup, toppling the monarchy and ending decades of a multiparty system that functioned while Britain was Egypt’s colonial master. Only men with military backgrounds have ruled Egypt since.While Mubarak’s overthrow has left Egyptians euphoric about their newfound freedoms, many are also worried about the social tensions and instability that could spiral in the wake of the autocratic leader’s departure.Christian-Muslim clashes this month left at least 13 killed and more than 100 wounded in the worst sectarian clashes in years. On Jan. 1, a suicide bomber blew himself up outside a church in the Mediterranean port city of Alexandria, killing at least 22 worshippers and wounding scores. A few days later, a policeman shot dead an elderly Christian man on a train.The Brotherhood, which has strongly campaigned for the adoption of the changes, advocates the installment of an Islamic government in Egypt. The ambivalence of its position on what role women and minority Christians play under their hoped-for Islamic government — like whether they could run for president or be judges — worry large segments of society.The military, in a bid to get the vote out, has decreed that they would be allowed to cast ballots at any polling center in the country with their national ID cards the only required proof of identity. They were required to dip their index finger in ink after voting to prevent multiple balloting – Yahoonews