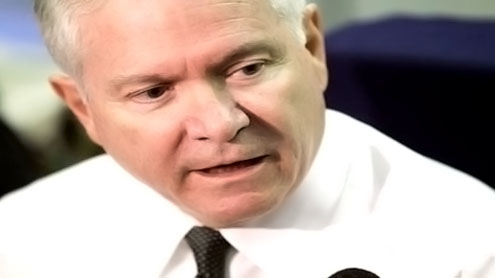 Russia: U.S. Defense Secretary Robert Gates arrived in Russia Monday to take a final personal shot at easing Moscow’s worries over a missile defense shield in Europe and to expand a military relationship that has grown dramatically since his Cold War days at the helm of the CIA.Gates, who is expected to retire this summer, told reporters traveling with him that Russian cooperation in the Afghanistan war, and support of U.N. Security Council resolutions against North Korea and Iran, underscore cooperation that has dramatically evolved in recent years. Russia also abstained in the recent United Nations vote for military intervention in Libya, effectively allowing the allied assault to go forward.”We have now had underway, for more than 40 years, the kind of dialogue with Russia that I’m just trying to get started with China,” Gates told reporters traveling with him shortly before landing in St. Petersburg.

Speaking to Kuznetsov Naval Academy midlevel officers during a stop at The Central Naval Museum, Gates said that 21st century security terror threats have created new opportunities for U.S. and Russia to cooperate.Both nations recognize, he said, that “allowing terrorism that weakens one nation does not provide opportunity for another, but rather ultimately increases the danger to all. “Gates, a Russian scholar, spent much of his career as an officer, and later director of the CIA, focused on the threat posed by the former Soviet Union. He has made four trips to Russia as defense secretary, but said he was last in St. Petersburg in 1992, making the first trip to the city by a CIA chief.His latest visit comes as the U.S. and Russia continue to joust over details and coordination of the European missile shield which is aimed at countering future Iranian threats. Russia has raised strong objections to the plan, which is already underway, and begins with ship-based, anti-missile interceptors and radars. It would add land-based radars in Southern Europe later this year.The four-phase plan would put land- and sea-based radars and interceptors in several European locations over the next decade.

Gates is expected to meet with top Russian leaders, including Defense Minister Anatoly Serdyukov, who said last month that the missile shield could undermine Russian nuclear deterrent forces.Moscow remains skeptical of U.S. insistence that the systems is not aimed at Russian missiles or that it could be used against Russia’s security interests.Reflecting on the changes in U.S-Russia relations over his career, Gates suggested they have moved from what was once a fierce rivalry to a bureaucratic brotherhood. Now, he said, the U.S. and Russia have a common enemy — the battle to modernize their militaries amid rising costs for weapons and elusive contract deadlines that are never met.He said that while the two nations’ interests will differ, they have learned one critical lesson from the past — to avoid the mistrust and lack of transparency that can trigger dangerous consequences.Acknowledging that Russia still has uncertainties about the defense shield, Gates told the young officers that both are committed to resolving the differences, and eventually collaborate, including on launch information, a data fusion center and conducting joint analysis