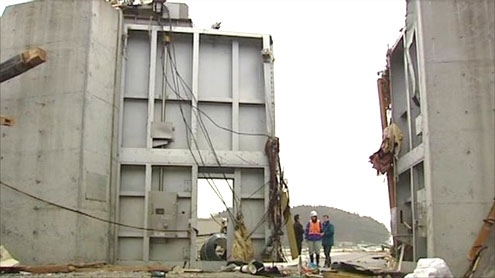 Police in Japan say 15,000 people may have been killed in a single prefecture, Miyagi, by the huge quake and tsunami which struck nine days ago.The official death toll has now risen to 8,450, with 12,931 people missing.But there was some good news after an 80-year-old woman and her grandson were found alive in the rubble of Ishinomaki city.Attempts continue to stave off a meltdown at the Fukushima nuclear plant.Engineers are still working to restore power supplies to the plant’s cooling systems, which were knocked out by the tsunami.But even when they do, there is no guarantee the cooling systems in the plant will work, says the BBC’s Rupert Wingfield-Hayes in Toyko.Experts say that an improvised spraying operation using fire trucks may have to continue for months, our correspondent says.But officials said conditions in reactor 3 – which has presented engineers with the most serious problems – appeared to have stabilised on Sunday, after they warned earlier that rising pressure might require radioactive steam to be vented.

The new figure of a possible 15,000 dead comes from police in the worst-hit Miyagi prefecture, and does not include the thousands more dead and missing in areas to the north and south. It is looking increasingly clear that the death toll will top 20,000 people at least, our correspondent says.The disaster dwarfs anything Japan has seen since World War II and people are beginning to talk of the disaster in similar terms, he says.In a rare story of survival, an elderly woman and a 16-year-old boy, believed to be her grandson, were found alive in a house in Ishinomaki, Miyagi prefecture, nine days after the quake, said Japanese media and police.Sumi and Jin Abe were trapped when their home collapsed in the quake but were able to get food from the refrigerator. They are both being treated in hospital.The authorities have begun building temporary homes for some of the hundreds of thousands of people – including an estimated 100,000 children – still sheltering at emergency evacuation centres.Many survivors have been enduring freezing temperatures without water, electricity, fuel or enough food.The destruction of the mobile phone network means people are queuing for hours to make their allocated phone call of one minute.

And crippling fuel shortages mean long queues at some petrol stations.Meanwhile, at the stricken Fukushima nuclear plant, firefighters have continued to spray water at the dangerously overheated reactors and fuel rods, in a desperate attempt to avert a meltdown.Engineers hope that restoring power will allow them to restart pumps to continue the cooling process, and have attached power lines to reactors 1 and 2, but it is unclear when they will attempt to turn the power back on.Kyodo news agency quoted Tokyo Electric Power Co as saying that previously overheated spent-fuel storage pools at reactors 5 and 6 had been cooled by Sunday morning.On Friday officials raised the alert level at the plant from four to five on a seven-point international scale of atomic incidents.The crisis, previously rated as a local problem, is now regarded as having “wider consequences”.It has highlighted the debate about the safety of nuclear power generation.Some 2,000 anti-nuclear protesters took to the streets in the Taiwanese capital Taipei to protest against the construction of the island’s fourth nuclear power plant, and anti-nuclear banners were also visible on an annual anti-war demonstration in Tokyo on Sunday.

Radiation levels have risen in the capital Tokyo, 240km (150 miles) to the south, but officials say the levels recorded are not harmful.Radioactive contamination has been found in some food products from the Fukushima prefecture, Japanese officials say.The iodine was found in milk and spinach tested between 16 and 18 March and could be harmful to human health if ingested, the officials said.International nuclear experts at the IAEA say that, although radioactive iodine has a short half-life of about eight days, there is a short-term risk to human health if it is ingested, and it can cause damage to the thyroid.On Sunday, chief cabinet secretary Yukio Edano said the government would decide by Monday whether to restrict consumption and shipments of food products from the area in the vicinity of the Fukushima plant.But Reuters reported the health ministry had already prohibited the sale of raw milk from Fukushima prefecture.Traces of radioactive iodine have also been found in tap water in Tokyo and five other prefectures, officials said on Saturday.The traces are within government safety limits, but tests usually show no iodine.Meanwhile, radiation has been detected for the first time in Japanese exports, with Taiwanese officials finding contamination in a batch of fava beans, although they say the amount is too small to be dangerous to humans – BBC