Gilani, Mamohan firm on resolving issues through dialogue to give peace, prosperity to two nations 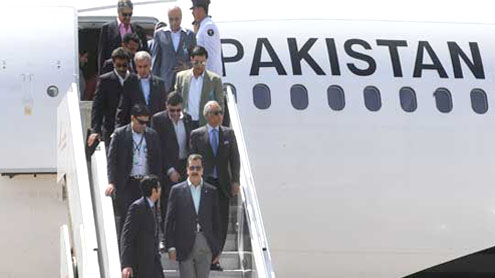 MOHALI: Prime Minister Syed Yusuf Raza Gilani and his Indian counterpart Dr Manmohan Singh on Wednesday agreed on resolving all issues through dialogue and give their nations peace and prosperity. The two leaders termed their meeting as “positive” as they briefed mediapersons about their day-long interaction since Prime Minister Gilani arrived here this noon to join his Indian counterpart to witness together the semi-final of their cricket teams. Gilani said his talks with Dr Singh on “all outstanding issues” focused on resolving them through dialogue. He said it was agreed to continue the “Thimpu spirit” which had been a success since last year.He said the same spirit helped Pakistan and India to successfully conclude the Interior Secretary level talks on March 28-29 and hoped that the upcoming commerce and foreign secretary level, and the foreign minister-level talks would also be a success.

He said there was a concensus on both sides that the two countries had the will and ability to resolve to their problems and stressed the need to give the world this positive message.“We need to focus on dealing with our common enemy – the issues of inflation, poverty, hunger, disease  and unemployment for the prosperity of two countries,” he said.Prime Minister Gilani said he had invited Dr Singh and the President of Indian National Congress Party Sonia Gandhi to visit Pakistan.Dr Manmohan Singh thanked Gilani to visit his country and accepting his invitation. He said the wonderful game of cricket had turned into a great opportunity for the two prime ministers to meet.
He termed it a “very good beginning” and said whatever the differences between Pakistan and India, the two governments had to find ways to resolve them.The Indian Prime Minister said he and Gilani held discussions on extensive issues and agreed on overcoming all challenges with sincere commitment. “It is our commitment to give peace to our nations,” he said.He said, “The message from Mohali is that the peoples of India and Pakistan want peace.”Felicitating India on winning the semi-final match, Prime Minister Yusuf Raza Gilani said success and losing was part of the game and said however “it is infact the success of the two countries”.