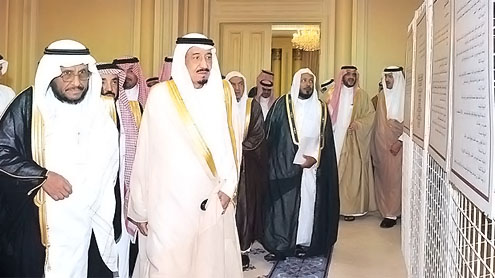 MADINAH: Riyadh Gov. Prince Salman, chairman of King Abdul Aziz Darat (Museum), on Wednesday launched a research chair at Madinah Islamic University for studies on the history of Madinah. The chair is named after the Riyadh governor.The agreement for launching the chair was signed by Muhammad Al-Oqla, president of the university, and Fahd Al-Sammary, secretary-general of the museum, which will provide consultancy and research services for the initiative.Prince Salman, who is on a visit to Madinah, also inspected the atlas for the history of Prophet Muhammad (peace be upon him). The project aims to document the places mentioned in the Prophet’s history.Fahd Al-Damigh, head of the atlas project, briefed Prince Salman on the work and noted the cooperation extended by Saudi universities to carry out the project.Earlier in the day, Madinah Gov. Prince Abdul Aziz bin Majed hosted a luncheon in honor of Prince Salman that was attended by a number of senior officials, academics and dignitaries. – Arabnews

Keifer Sutherland hits the web with ‘The Confession’

Keifer Sutherland hits the web with 'The Confession'