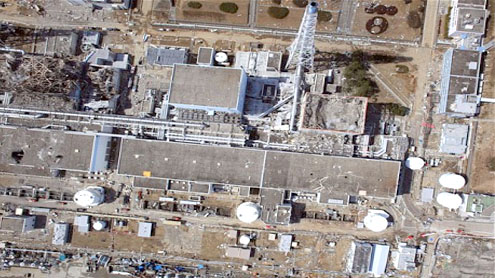 Japan is to decommission four stricken reactors at the quake-hit Fukushima nuclear plant, the operator says.Tokyo Electric Power (Tepco) made the announcement three weeks after failing to bring reactors 1 – 4 under control. Locals would be consulted on reactors 5 and 6, which were shut down safely.Harmful levels of radioactivity have been detected in the area.More than 11,000 people are known to have been killed by the devastating 11 March earthquake and tsunami.Emperor Akihito visited a centre for earthquake and tsunami victims in the Tokyo area on Wednesday.The emperor’s visit “gives me strength” said one of the evacuees.Continue reading the main story,    Amid all the destruction, it is a safe haven”End Quote Kathy Mueller International Federation of Red Cross, apanese experts are considering whether to cover the reactor buildings at the Fukushima Daiichi plant with a special material, to stop the spread of radioactive substances, Chief Cabinet Secretary Yukio Edano says.On Wednesday, the government ordered nuclear power plant operators to start implementing new safety measures immediately.

The steps – to be completed by the end of April – include preparing back-up power in case of loss of power supply.Fire trucks will be on standby to intervene and ensure cooling systems for both reactors and pools of used fuel are maintained.Minister of Economy, Trade and Industry Banri Kaieda said this did not mean that nuclear plant operations should be halted.Tepco’s president Masataka Shimizu has been admitted to hospital, suffering from high blood pressure and dizziness.Hours later, Tepco chairman Tsunehisa Katsumata spoke to reporters for the first time.He admitted that the company had not been able to cool the reactors, and pledged maximum efforts to stabilise them. And he added that reactors 1-4 would eventually have to be shut down for good.Mr Katsumata said his company was preparing to compensate those suffering damage caused by radiation leaks.The chairman also apologised for the inconvenience caused by the rolling blackouts imposed to cope with power shortages.The earthquake and tsunami damaged the nuclear plant’s power supply, leading to a failure of the cooling systems.Since then engineers have been using seawater to cool down the core of the reactors, but the operation has failed to stop radioactive leaks.

Japan’s Prime Minister Naoto Kan has said the country is on “maximum alert”.Tepco has been accused of a lack of transparency and failing to provide information promptly.Seawater near the Fukushima Daiichi nuclear plant has reached a much higher level of radiation than previously reported.The new readings near reactor No 1 – 300m (984ft) from the shore – showed radioactive iodine at 3,355 times the legal limit, said Japan’s nuclear safety agency.Japan’s emperor made a rare public appearance at an evacuation centre in the Tokyo area.Earlier samples had put the iodine level in the sea at 1,850 times the legal limit.Much lower – but still elevated levels – of the same radioactive element have been found in seawater as far as 16km (10 miles) to the south.Tepco and the safety agency say the exact source of the leak is unknown.”Iodine 131 has a half-life of eight days, and even considering its concentration in marine life, it will have deteriorated considerably by the time it reaches people,” Hidehiko Nishiyama, deputy director-general of Japan’s nuclear safety agency told a news conference.

Radioactive materials are measured by scientists in half-lives, or the time it takes to halve the radiation through natural decay.Iodine 131 was blamed for the high incidence of thyroid cancer among children exposed to fallout from the Chernobyl nuclear disaster in 1986.Workers at the Fukushima plant are trying to prevent radioactive water from seeping into the sea.Highly radioactive liquid has been found inside and outside several reactor buildings.Small amounts of plutonium have also been detected in soil at the plant – the latest indication that one of the reactors suffered a partial meltdown.But, like the discovery of plutonium, the high levels of radiation found inside and outside reactor buildings are likely to have come from melted fuel rods.Theories for the leak centre on two possibilities – steam is flowing from the core into the reactor housing and escaping through cracks, or the contaminated material is leaking from the damaged walls of the water-filled pressure control pool beneath the No 2 reactor.The plutonium – used in the fuel mix in the No 3 reactor – is not at levels that threaten human health, officials said.