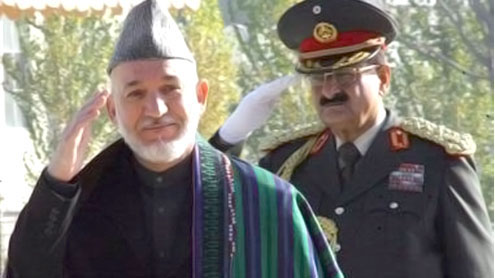 KANDAHAR: Afghan President Hamid Karzai has sacked the deputy governor of a restive southern province after two women performed without headscarves at a high-profile concert he helped organise, an official from Helmand province said on Wednesday.“Instead of being complimented for organising such a big show in order to bring a smile to people’s faces, Karzai sacked the deputy governor,” said Dawood Ahmadi, spokesman for the Helmand governor. “Unfortunately, the president has some ultra-conservative people around him who advise him on these issues.” Abdul Satar Mirzakwal had been second in command for over three years in restive Helmand province, a Taliban stronghold where attacks are common and insecurity rife.

The concert, held last November, was the first major musical performance in the province for many years and featured Afghan star Farhad Darya, who now lives abroad. It drew around 12,000 people, including foreign military officials stationed nearby, and the smooth staging was hailed as a huge security achievement for the Afghan national police.Karzai’s office declined to comment on the dismissal, which may have been aimed at currying political support in the more conservative swathes of Helmand society. Mark Sedwill, the top NATO civilian representative in Afghanistan, recalled in a recent speech that the president had discovered on a visit to the Helmand town of Marjah last year that his leadership was not respected in the area.“As President Karzai said afterwards, in areas like Marjah, people preferred the Taliban to his government and regarded him as a puppet: a point he was to repeat publicly and which has affected his political outlook since,” Sedwill said. – Dailytimes