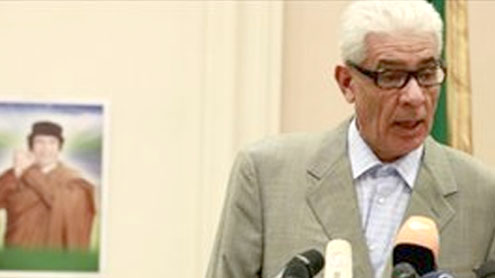 Libyan Foreign Minister Moussa Koussa is in Britain and “no longer willing” to work for Colonel Muammar Gaddafi’s regime, the UK Foreign Office says.He flew in from Tunisia on a non-commercial flight and was questioned for several hours by British officials.”He travelled here under his own free will. He has told us he is resigning,” said a Foreign Office spokesman.His apparent defection comes as rebels in Libya are retreating from former strongholds along the eastern coast.The rebels have now lost the key oil port of Ras Lanuf and the nearby town of Bin Jawad, and are also in full retreat from Brega.In the west, the rebel-held town of Misrata is still reportedly coming under attack from pro-Gaddafi troops, reports say.A British Foreign Office spokesperson said: “We can confirm that Moussa Koussa arrived at Farnborough Airport on 30 March from Tunisia.

“He has told us that he is resigning his post. We are discussing this with him and we will release further detail in due course.”Moussa Koussa is one of the most senior figures in Gaddafi’s government and his role was to represent the regime internationally – something that he is no longer willing to do.”We encourage those around Gaddafi to abandon him and embrace a better future for Libya that allows political transition and real reform that meets the aspirations of the Libyan people.”The Foreign Office in London called on other members of the Libyan government to abandon Colonel Gaddafi.UK intelligence officials hope that his deep knowledge of the Libyan regime will help bring about its early end, says the BBC’s diplomatic correspondent Humphrey Hawksley.Mr Koussa arrived in London on what is believed to have been a British military plane, our correspondent adds.A senior US administration official, speaking to AFP News agency on condition of anonymity, said: “This is a very significant defection and an indication that people around Gaddafi think the writing’s on the wall.”

Earlier, British Foreign Secretary William Hague announced that five Libyan diplomats were being expelled from the country.He told MPs that the five, who include the military attache, “could pose a threat” to Britain’s security.The BBC’s Ben Brown in the eastern coastal town of Ajdabiya says the rebels simply cannot compete with the discipline and firepower of Col Gaddafi’s forces. He says the current situation is a dramatic about-turn for the rebels who, over the weekend, had seized a string of towns along the coast and seemed to be making good progress with the help of coalition air strikes.Most reports suggested the rebels had fled back to Ajdabiya, and some witnesses said civilians had begun to flee further east towards the rebel-held city of Benghazi.Maj Gen Suleiman Mahmoud, the second-in-command for the rebels, told the BBC that rebels forces needed time, patience and help to organise themselves.”Our problem we need help – communication, radios, we need weapons,” he said, adding that the rebels had a strategy but fighters did not always obey orders.He also said allied liaison officers were working with the rebels to organise raids.

Human Rights Watch has accused Col Gaddafi’s forces of laying both anti-personnel and anti-vehicle mines during the current conflict after a discovery of what it said were dozens of mines on the eastern outskirts of Ajdabiya.France and the US say they are sending envoys to Benghazi to meet the interim administration.And an international conference on Libya in London has agreed to set up a contact group involving Arab governments to co-ordinate help for a post-Gaddafi Libya.The US and Britain have suggested the UN resolution authorising international action in Libya could also permit the supply of weapons.This message was reinforced by British Prime Minister David Cameron in Parliament on Wednesday.”UN [Security Council Resolution] 1973 allows all necessary measures to protect civilians and civilian-populated areas, and our view is this would not necessarily rule out the provision of assistance to those protecting civilians in certain circumstances,” he said. “We do not rule it out, but we have not taken the decision to do so.”Meanwhile, US media reports say President Barack Obama has authorised covert support for the Libyan rebels. The CIA and White House have both declined to comment on the reports.Several thousand people have been killed and thousands wounded since the uprising against Col Gaddafi’s rule began more than six weeks ago. – BBC

Gilani leaves for Pakistan after day-long visit of Mohali

Gilani leaves for Pakistan after day-long visit of Mohali