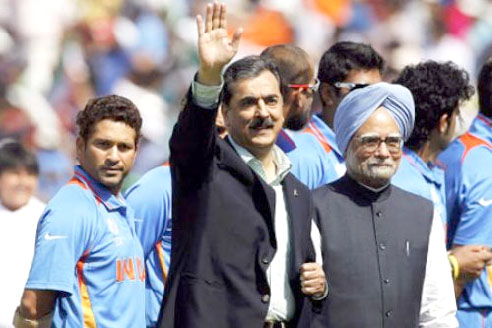 MOHALI:  There is never a dull moment in an India-Pakistan cricket clash and even before the start of their World Cup semi-final, the electrifying atmosphere came alive a bit more when the two countries’ PMs walked into the stadium to greet the players.The combined enthusiasm of a 30,000-strong crowd at the Punjab Cricket Association ground made for quite a sight during the anthems ceremony before the match. The Pakistani fans sang their lungs out when their anthem was played but the decibel levels went up expectedly higher when the Indian national anthem was played.Post the ceremony, Indian Prime Minister Manmohan Singh and his Pakistan counterpart Yousuf Raza Gilani walked into the stadium, escorted by ICC president Sharad Pawar. The two leaders took turns to shake hands with players of both the teams.First in line was the Pakistan Skipper Shahid Afridi took up the role of introducer after enthusiastically shaking hands with Singh. The Indian PM was the first to exchange pleasantries with the Pakistan team followed by Gilani. When it came to MS Dhoni’s men, Gilani was the first to shake hands followed by Singh. – Nation