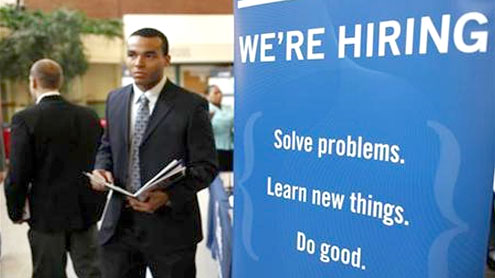 The ADP report, which is jointly developed with Macroeconomic Advisers LLC, did little to change expectations of the government’s much more comprehensive labor market report due out on Friday, which includes both public and private sector employment.”While a touch softer than February’s, this is a strong report that indicates continued momentum in the pace of labor market recovery,” Barclays Capital wrote in a note. Barclays said it was maintaining its expectation for Friday’s report to show an increase of 175,000 jobs in March.A Reuters poll of analysts shows a median forecast for nonfarm payrolls to rise by about 190,000 jobs in March, with private payrolls forecast to rise by 200,000.

The slow recovery in the jobs market has been one of the biggest hurdles to a sustainable economic recovery, but recent data has raised optimism that improvement in employment is strengthening.A survey of U.S. chief executives by the Business Roundtable released on Wednesday underscored the growing optimism. More than half of the CEOs surveyed said they are looking to add jobs over the next six months and their view of the economy brightened in the first quarter.ADP said the job gains in March showed good breadth, with small businesses adding 102,000 jobs and medium-sized and large businesses gaining 82,000 and 17,000 jobs, respectively.ADP also downwardly revised its February’s figure to 208,000 from 217,000.”It looks like the U.S. economic recovery continues, and the improving labor market should be a buffer against weak areas like real estate,” said David Katz, chief investment officer at Matrix Asset Advisors in New York.

Housing has remained outside of the broader recovery and consumer sentiment has weakened as food and gasoline prices jumped, adding to signs the economy lost momentum in early 2011. Analysts, however, expect the improving labor market should offset that.Separate data on Wednesday showed applications for U.S. home mortgages tumbled last week as higher interest rates sapped demand for loan refinancing.Another report showed the number of planned layoffs at U.S. firms fell in March after spiking up the month before. Employers announced 41,528 planned job cuts this month, down 18 percent from February, according to the report from consultants Challenger, Gray & Christmas, Inc.Overall, 130,749 job cuts were announced in the first three months of the year, the lowest rate of downsizing since 1995.However, the Challenger report said the highest level of job reductions this year has been seen in the government sector. Losses are expected to grow as cash-strapped state and local governments deal with budget problems.

U.S. Treasury prices rose modestly immediately after the ADP report as traders said there was relief the number was slightly below the consensus, while U.S. stocks were trading higher in the late morning.Policymakers at the Federal Reserve have ramped up debate on whether the economy is strong enough for the central bank to scale back its massive stimulus program.Economists often refer to the ADP report to fine-tune their expectations for the government monthly payrolls numbers, though it is not always accurate in predicting the outcome.However, February’s reading tracked the payrolls data more closely, coming in at 217,000 compared with the government’s 212,000. According to IFR Markets, it was only the second single-digit miss since ADP revised its methodology in December 2008. – Yahoonews