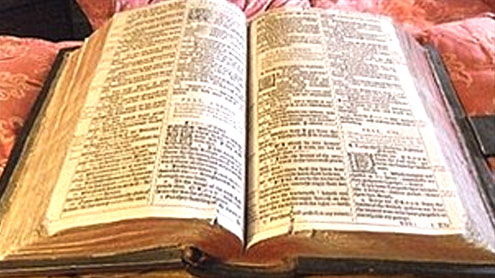 LONDON: A printing error helped a 12th century English village church realize it owned a rare 400-year-old King James Bible, the book that changed the world.The edition that had been sitting on a ledge in the pretty Anglican church in Wiltshire, central England for the past 150 years, barely touched and much less read, is one of only a handful that still exists.Although a sign above the book indicated it dated back to 1611, it was only after the parochial church council (PCC) of St Laurence in Hilmarton decided to get it authenticated during the 400th anniversary of the King James Bible that they made their discovery.”I noticed it like everyone who uses the church noticed it as an old Bible that was sort of there, but no one was sure about its origins until very recently,” PCC member Chris Mastin-Lee told Reuters.

St Laurence stopped using the Bible after the introduction of more modern versions, and fewer than 200 original printings of the 1611 King James version are believed to exist.Although the church, which has about 60 parishioners, is not expecting coach loads of tourists to suddenly turn up, Mastin-Lee said he would not be surprised to see an increase in numbers wanting to take a look.The St Laurence Bible, whose heavy handset Gothic script was printed on linen fabric, lacks any gold leaf or ornate illustrations, and was authenticated as a second edition because of a tell-tale misprint.A place in the Gospel of Matthew that should say Jesus entered the Garden of Gethsemane and spoke to his disciples instead says that Judas, who betrayed Jesus, entered the garden.The edition, which has suffered a bit of wear and tear over the years also has the first five chapters of Genesis missing.Other damage was caused when a former vicar, the Reverend Francis Fisher, had ornate hand-carved binding put on the book after discovering it in a church chest in 1857.

“This is speculation but when he found it in the parish chest it’s likely that the edges of the pages would have been quite tatty,” Mastin-Lee said.”When he had the Bible bound we understand that it was the custom of Victorian binders to trim the pages to make them neat.”But the Bible is priceless as an example of one of the first translations of the Gospels into English.”Within 300 years, this translation transformed how English people spoke to each other, how we wrote our books and how we see our God,” the King James Bible Trust says on its website.”The translation of the Bible has had enormous consequences not just for England but America and this is still significant today.”Some phrases in the King James Bible are still used today, such as “a cross to bear,” “a broken heart” and a “law unto themselves.”The church is looking to raise funds to put the Bible in a glass case, from which people would still be able to turn the pages and read it. – Yahoonews