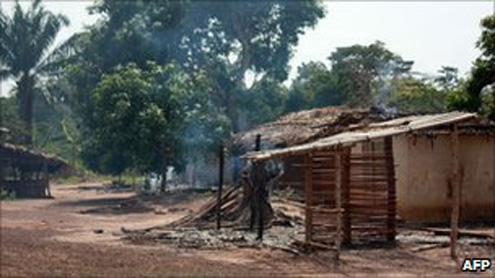 nternational Committee of the Red Cross (ICRC) staff visited Duekoue and said the scale and brutality of the killings were shocking.

The city was captured by fighters supporting UN-recognised president Alassane Ouattara this week.

His forces have encircled rival Laurent Gbagbo in the main city, Abidjan.Mr Ouattara was internationally recognised as president after winning a run-off vote in November, but Mr Gbagbo also claimed victory and refused to leave office.

A curfew called by Mr Ouattara from 2100 GMT to 0600 GMT in Abidjan remains in place. Land and sea borders remain closed, although on Friday the country’s air space was reopened.

‘Fearing for their lives’

Duekoue has seen fierce fighting this week, and aid agencies have warned repeatedly that civilians were being subjected to major violence.

The ICRC said delegates and volunteers from the Ivorian Red Cross had visited the city on Thursday and Friday to gather evidence of the killings, which are believed to have taken place on Tuesday.

“We have information that at least 800 persons were killed on 29 March in Duekoue in inter-communal violence. Our colleagues saw hundreds of bodies,” ICRC spokeswoman Dorothea Krimitsas told Reuters news agency. The head of the ICRC delegation, Dominique Liengme, said in a statement: “This incident is particularly shocking in its size and brutality.”

“The ICRC condemns direct attacks on civilians and reminds the parties to the conflict to make sure that people in the territory under their control must be protected under all circumstances,” she added. The Geneva-based organisation said tens of thousands of women, men and children had fled fighting in Duekoue since Monday.

The city lies on a strategic crossroads in the west of Ivory Coast.
Thousands fled into Duekoue just a few days ago and tried to take shelter in churches and town halls. Thousands more have been trying to get cross Ivory Coast’s border into Liberia.

The International Organisation for Migration (IOM) said many Duekoue residents were heading to the nearby town of Guiglo “fearing for their lives”.
It is not clear whether Mr Ouattara’s forces were involved in the killings but Duekoue has been under their control since Tuesday. The United Nations human rights office says it has received reports of major human rights violations committed by both sides in the conflict.
Gbagbo ‘going nowhere’

The national army has put up almost no resistance since Mr Ouattara’s supporters launched an offensive to oust Mr Gbagbo on Monday, sweeping down from the north to capture the capital, Yamoussoukro, and the key port of San Pedro.

There were fierce clashes on Friday outside the presidential palace and the headquarters of state television in the upmarket district of Cocody. Fighting was also reported in the Plateau and Agban areas.

Figures for the dead and wounded were unavailable. Residents of Abidjan say they are afraid to leave their homes.
The BBC’s John James in Bouake says Mr Gbagbo is holed up inside the fortress-like presidential mansion, with his last remaining allies and the Republican Guard.

“Laurent Gbagbo is going nowhere. He is the elected president of Ivory Coast,” a spokesman for Mr Gbagbo’s Ivorian Popular Front (FPI) said.
But Western diplomats say it is impossible now for Mr Gbagbo to escape defeat, and it is unclear if he will come out of this alive, our correspondent adds.
Patrick Achi, a spokesman for Mr Ouattara, said there was no longer an offer on the table for Mr Gbagbo to stand down peacefully.
“He should stand trial in the International Criminal Court. That is the only thing that he deserves.” The international community has stepped up its pressure on Mr Gbagbo with a series of calls for him to stand aside.
West Africa’s second biggest economy has been brought to its knees by the conflict, which has sent global cocoa prices spiralling upwards. Ivory Coast is the world’s largest cocoa producer.