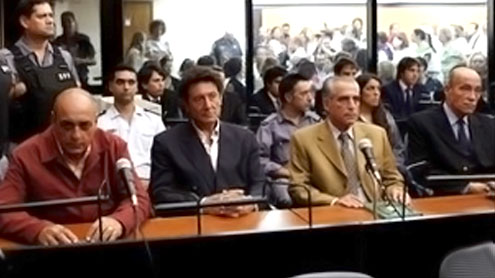 Former Argentine Gen Eduardo Cabanillas has been sentenced to life in prison for running a notorious detention centre during military rule in 1976-83.Three former intelligence officers were also convicted of murder, torture and illegal imprisonment.Around 200 left-wing activists were kidnapped and taken to the Automotores Orletti secret prison in Buenos Aires.Most of the victims were Uruguayan, but there were also Chileans, Bolivians, Peruvians and Cubans.Thousands of Argentines were tortured and murdered in other centres run by the armed forces.The crimes were part of Operation Condor, a coordinated campaign by South American military rulers to crush opposition movements.

Former intelligence agents Honorio Martinez and Eduardo Ruffo were sentenced to 25 years each, and former military intelligence officer Raul Guglielminetti was given 20 years.The sentences were welcomed by Macarena Gelman, whose parents were detained in the secret prison and torture centre, which was disguised as a mechanical workshop.”It is a little bit of justice when we need so much,” she said from Uruguay.Her father Marcelo Gelman was killed after being taken to Automotores Orletti, and his body dumped in a river in a cement-filled drum.Her mother Maria Claudia Garcia, who was pregnant when she was abducted, was later taken to Uruguay and made to disappear.Macarena Gelman was born in captivity and raised by a Uruguayan policeman, discovering her true identity only in 2000.Operation Condor was devised in 1975 by military officials from Argentina, Brazil, Bolivia, Chile, Paraguay and Uruguay.Its aim was to silence the opposition by sending teams into other countries to track, monitor and kill dissidents.Around 30,000 people were killed or made to disappear by the armed forces during military rule in Argentina, a period known as the “Dirty War.” – BBC