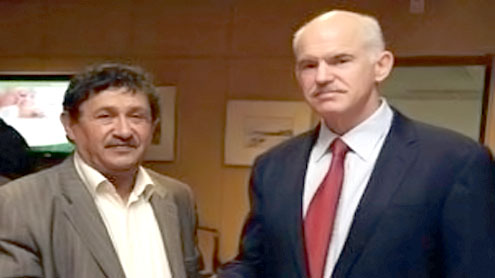 Gadhafi has told Prime Minister George Papandreou the Libyan leader wants an end to the fighting in his country.Greek Foreign Minister Dimitris Droutsas said Sunday that it appears Libyan authorities “are seeking a solution” to the armed conflict with anti-Gadhafi forces. Droutsas spoke after acting Libyan Foreign Minister Abdul-Ati al-Obeidi met with Mr. Papandreou in Athens.The talks were held at the request of the Libyan prime minister. Greece, a European Union and NATO member, has traditionally had good relations with Mr. Gadhafi. Greek officials said Obeidi told Mr. Papandreou he also will travel to Malta and Turkey as the Libyan government seeks a way out of the crisis.The New York Times reports that Mr. Gadhafi’s son, Seif el-Islam Gadhafi, has proposed a resolution to the conflict under which his father would relinquish power for a transition to constitutional democracy under the son’s direction. The newspaper, citing a diplomat with close ties to the Libyan government, said neither the senior Mr. Gadhafi nor the rebels appear ready to accept Seif el-Islam Gadhafi’s proposal, which follows years of his public efforts to bring about such a change.

Neither Mr. Gadhafi nor his son holds any formal office in Libya.Meanwhile, a Turkish ship carrying 230 wounded from the besieged western city of Misrata docked briefly in the rebels’ eastern stronghold of Benghazi Sunday. The Ankara, a car ferry turned into a makeshift hospital, picked up another 100 wounded civilians before departing for the Turkish port of Cesme, where hospitals are preparing to treat the casualties.Doctors on board the ship said many people had extremely serious injuries. Wounded Misrata residents told journalists the city has no water, electricity or medicine, and that “pro-Gadhafi snipers are everywhere.”Turkey’s foreign minister ordered the Ankara into Misrata after it spent four days waiting in vain for permission to dock. Foreign ministry officials said 10 Turkish fighter jets and a navy frigate provided protection Saturday as the ferry docked at Misrata.On Sunday, Mr. Gadhafi’s forces pressed on with attacks against Misrata, the last key city in the western half of the country still largely under opposition control.

Libyan rebels and government forces also continued their standoff near the strategic oil town of Brega Sunday. Anti-government fighters in Brega, facing the more heavily armed government troops, are said to have made a tactical withdrawal. Still, a rebel commander said his forces are becoming better organized and trained.In Washington Sunday, the Pentagon said the United States has approved a NATO request to extend air strikes on Libya through Monday because of “recent poor weather.” The U.S. military had planned to stop flying strike missions in Libya as of Sunday after it passed control of the air operation to NATO last week.On Saturday, a British diplomatic mission arrived in Benghazi. The team is led by senior British diplomat Christopher Prentice, who visited the eastern city last week. The British Foreign Office, while confirming the visit, provided few details except to say Prentice is conferring with leaders of the rebel National Transition Council (TNC).NATO said it is investigating a coalition air strike near Brega on Friday that claimed the lives of 13 rebel soldiers. The head of the rebel council called the bombing a mistake, apparently the result of someone in the group firing an anti-aircraft gun into the air.Brega is one of several oil towns along the Mediterranean coast that has changed hands from rebel to government control numerous times since fighting broke out in mid-February. – Voanews