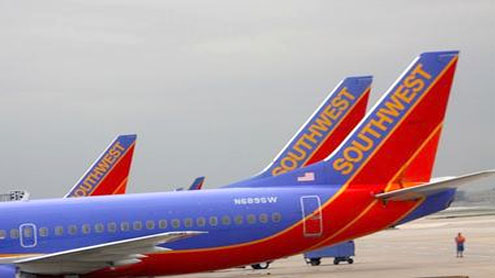 NEW YORK: Southwest Airlines cancelled about 600 flights this weekend as the airline continues its inspection of 79 of its Boeing 737 aircraft, in the aftermath of an emergency landing of one of its planes on Friday.The airline cancelled 300 flights Sunday after cancelling the same number on Saturday. Southwest Airlines spokeswoman Whitney Eichinger says it still hasn’t made a decision about Monday’s flights.”We are working as diligently as possible to minimize any impact on (customers’) travel plans,” Eichinger told The Associated Press Sunday.Southwest normally has about 3,400 flights each day though it’s slightly reduced on Saturday. That means that almost 9 percent of the total number of flights were cancelled each of the two days.

No flights were cancelled on Friday.The aircraft is being inspected over the next several days, the company said.No one was seriously injured Friday as the aircraft carrying 118 people rapidly lost cabin pressure and made a harrowing but controlled descent from 34,500 feet, landing safely near Yuma, Ariz., 150 miles southwest of Phoenix. But passengers recalled tense minutes after a hole ruptured overhead with a blast, and they fumbled frantically for oxygen masks as the plane descended.In a release issued Saturday, Southwest said the passengers on board Flight 812 have received a full refund along with an apology and two complimentary round-trip passes on Southwest for future flights.On Sunday, federal investigators examining the damaged plane in Yuma said the entire length of a 5-foot-long tear in the skin of the aircraft shows evidence of pre-existing fatigue cracking. – Yahoonews