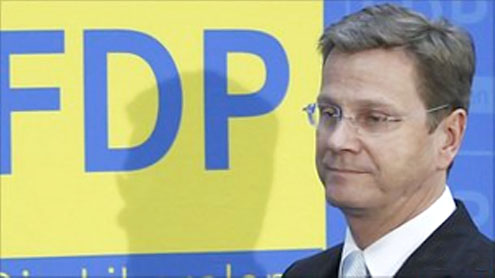 Germany’s Foreign Minister Guido Westerwelle is resigning as head of the liberal Free Democrat Party (FDP) and as deputy to Chancellor Angela Merkel.Mr Westerwelle’s resignation follows a series of poor state election results for the FDP, the junior partner of Mrs Merkel’s Christian Democrats (CDU).The FDP will choose a new leader at a congress next month.But Mr Westerwelle remains foreign minister in the ruling coalition. That was confirmed by Mrs Merkel.The FDP has struggled since 2009, when it got 14.6% in national elections and formed a government with the CDU.Last month the FDP suffered a massive blow in the powerful state of Baden-Wuerttemberg, the most prosperous part of Germany, earning just 5.3% of the vote in state elections.The CDU, which has ruled the state since 1953, took 39% – not enough to prevent the Greens and Social Democrats (SPD) forming a new state government.

In Rhineland-Palatinate state last month the result was even worse for the FDP – 4.2% – and meant it was unable to get into the state parliament.Mr Westerwelle’s pro-business FDP took a battering in Baden-Wuerttemberg partly because many voters objected to a high-speed railway project identified with big business interests.Mr Westerwelle also came under fire for aligning Germany with Russia and China at the UN, in contrast to Germany’s Nato allies, who voted to impose a no-fly zone on Libya.Addressing reporters on Sunday night the FDP leader said that “after 10 years as party chairman, I will not run for the office again at the coming federal party congress”.And on Monday FDP sources quoted him as saying “it is perfectly clear that the next party chairman, if he belongs to the cabinet, will also be vice-chancellor”.Mrs Merkel faces national elections in 2013 and the state elections this year are seen as a key test of support for the CDU-FDP coalition.Commenting on Mr Westerwelle’s move, she said “it is certainly a turning point for the liberals, but the coalition’s work will continue.”I look forward to working with him further as foreign minister in the government.” – BBC

Babies in brands are the new kiddie chic