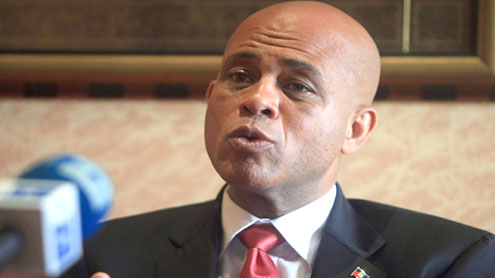 Preliminary results in Haiti’s presidential election suggest musician Michel “Sweet Micky” Martelly won the runoff vote on 20 March.He defeated ex-senator and former first lady Mirlande Manigat, officials quoted by news agencies say.Turnout in the second round was high and voting was largely peaceful, although still marred by fraud.Haiti is struggling to rebuild after the January 2010 earthquake and to cope with a cholera epidemic.Final results are not expected until 16 April at the earliest.If Mr Martelly, who’s promised change for the Haitian people, becomes the next president he will face some serious challenges, says the BBC’s Andy Gallacher.Hundreds of thousands of earthquake survivors still live in squalid tent cities as the cholera outbreak which has killed thousands remains out of control.Mr Martelly is politically inexperienced but his message of reform appealed to Haiti’s poor and unemployed, our correspondent adds.

Mr Martelly benefited from the support of five candidates eliminated in the first round. Fellow musician Wyclef Jean, whose own candidacy was ruled invalid, also backed Mr Martelly.The run-off vote was supposed to take place in January but was delayed.Observers said the second round was much better organised than the first in November, when turnout was only 23%.Jude Celestin, who had the backing of outgoing President Rene Preval, was initially placed second in the first round but withdrew from the race after international monitors found there had been widespread fraud in his favour.Two people were shot dead during second-round voting in clashes between rival political factions in different rural areas.The electoral commission extended voting by an hour because some polling stations were missing voting materials.But the head of the commission said at the time that reports of irregularities would have “no impact on the electoral process as a whole”.Mr Preval’s mandate formally ended on 7 February but he has parliamentary approval to stay in office until 14 May. – BBC