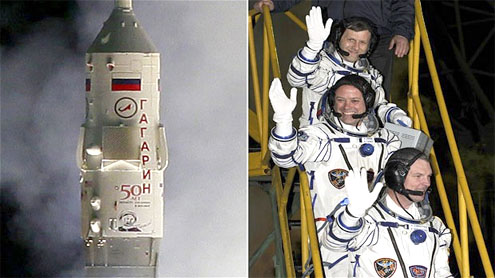 A new crew for the International Space Station has blasted off from Russia’s Baikonur space port in Kazakhstan aboard a Soyuz rocket.The two Russians and one US astronaut are to join three others – a Russian, an American and an Italian – aboard the station.Their spacecraft is emblazoned with the name and portrait of the USSR’s Yuri Gagarin, the first man in space.Gagarin’s historic journey took place 50 years ago this month.

The Russian Soyuz TMA-1 spacecraft was launched on a Soyuz-FG rocket at 0418 local time (2218 GMT Monday), and is due to dock with the space station at 0518 on Thursday.Russian crewmen Andrei Borisenko, 46, and Alexander Samokutyayev, 40, are making their first journey to the space station while America’s Ron Garan, 49, spent 13 days in space on a shuttle mission in 2008.”We’ve got Ron who’s got this experience and he promised to help us with some issues and the feelings that we might encounter and that cannot be modelled on earth,” Samokutyayev told reporters.In time-honoured tradition, the three men earlier visited the cabin where Gagarin spent his last night before his flight.Garan said he had got “a little bit of chills” when he visited the cabin, where all the furniture and even the space pioneer’s personal belongings are kept intact.”Fifty years ago, one nation launched one man, basically as a competition,” he remarked.”Today, the three of us represent the many nations of the international partnership that makes up the International Space Station.”