Obama kicks off 2012 US re-election campaign 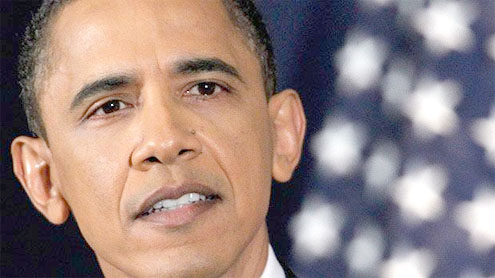 WASHINGTON: US President Barack Obama launched his bid for re-election in 2012 on Monday, capitalizing on better news on the economy and pushing ahead of Republicans who are struggling to find a candidate.Obama, a Democrat who won a sweeping victory over Republican Senator John McCain in 2008 with a message of change, said in a low-key email to supporters that he was filing papers to start his re-election bid in a formal way.“So even though I’m focused on the job you elected me to do, and the race may not reach full speed for a year or more, the work of laying the foundation for our campaign must start today,” he said in the e-mail.He said he needed to begin mobilizing for his re-election even though it is not yet time for him to begin “campaigning in earnest.” Obama has the luxury of ramping up his campaign slowly, in part because the field of Republicans who will vie to challenge him has yet to take shape. The Obama campaign is expected to raise an unprecedented $1 billion.

Several Republicans, including former Massachusetts Gov. Mitt Romney and former Minnesota Gov. Tim Pawlenty, are laying the groundwork for their own campaigns but none of them has formally announced a candidacy.Early polls show Obama leading potential Republican rivals. The first scheduled debate of the Republican nominating race was postponed last week from May until September because of a lack of candidates.Reacting to Obama’s announcement, Pawlenty released a 35-second video of his own highlighting high unemployment, weakness in the housing market and surging federal debt.“How can America win the future, when we’re losing the present?” Pawlenty asks in the video. “In order for America to take a new direction, it’s going to take a new president.” The state of the economy, which is now growing but faces headwinds from rising oil prices and uncertainty in the global outlook, is likely to be pivotal in the campaign.The White House received hopeful news on the economy on Friday when data showed that the US unemployment rate fell in March to 8.8 percent. The figure is still high but it is a two-year low, as employers boosted their payrolls by a solid 216,000.

The ongoing budget fight with Republican lawmakers could be a key issue in the election debate.The White House and lawmakers are struggling to hammer out details of a compromise measure to fund the government for the rest of this year. It would cut spending by $33 billion.If the two parties cannot find common ground, it could force a government shutdown that the White House fears could harm the economy just as it is starting to improve.Obama’s announcement comes as he has focused his message recently on reducing US dependence on foreign oil and investing in innovation and education — themes he likely will highlight in his bid to hold on to the White House next year.Obama also has defended the US military intervention in Libya that is supported by most Americans, according to polls.Republicans say Obama’s policies to boost the economy and expand healthcare coverage are too expensive. They are pressing Democrats to make deep spending cuts to shrink the US deficit, another issue that could play a crucial role in the campaign.Obama’s main legislative victories as president were securing an overhaul of the US healthcare system and financial regulation in 2010.

Obama’s campaign will be run by Jim Messina, a former White House deputy chief of staff. He will lead the operation out of the president’s hometown of Chicago with the help of veterans of the 2008 campaign such as close Obama adviser David Axelrod.The president has already started fundraising for Democrats in recent weeks. Filing papers with the Federal Election Commission will allow Obama to fill his own campaign coffers directly as well.Obama’s email, which closed with a button labeled “donate” that linked to his campaign website, said his 2012 bid would have to be more innovative than his successful 2008 organization.A two-minute, 10-second video on the site, titled “It Begins With Us,” features supporters from around the country discussing the Democratic president and the state of the nation. But Obama is not shown or heard. – Arabnews