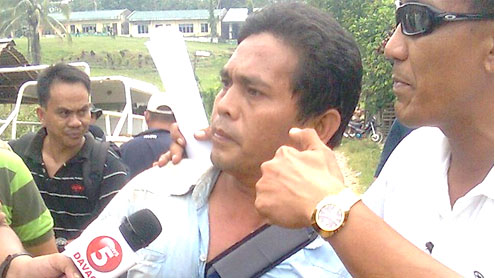 Philippines: Armed tribesmen on Wednesday released 12 hostages they had been holding for six days in a jungle hide-out in the southern Philippines to demand the release of jailed relatives, police said.Most of the hostages were grade school teachers who were seized by five Manobo tribesmen last Friday in a remote southern town in Agusan del Sur province on Mindanao Island.The hostage-takers were demanding the release of tribal leader Jobert “Ondo” Perez, who was jailed with three other tribesmen for taking 79 people captive in the same place in 2009 over a long-running clan feud.Perez was temporarily released earlier in the week to help end the standoff, and officials promised the gunmen they’d speed up the resolution of his case.Police operations officer Joel Dolon Mendez said the gunmen abandoned the captives — 11 teachers and a 10-year-old girl — early Wednesday and then escaped.

“The hostages walked to a safe area and were secured by our forces,” he told The Associated Press by phone.The hostages “all looked OK,” said regional police chief Reynaldo Rafal. “They’re haggard-looking, but they’re all OK. I know one child was sick, but the child is OK.”The five hostage-takers fled and police were pursuing them, Mendez said.The freed hostages were undergoing a medical checkup and debriefing, police said.Last August, the hostage-taking of a busload of Hong Kong tourists in Manila ended in disaster with the death of eight of the captives. The kidnapper — a dismissed policeman who wanted his job back — was shot to death by police commandos.

In the southern Philippines, clan feuds, fueled by weak law enforcement in remote regions awash with illegal firearms, have often erupted into deadly clashes and ransom kidnappings. The violence underscores the complexity of security problems in the south, where troops have been battling Muslim and communist insurgents, along with al-Qaida-linked militants, for years.In 2009, Jobert Perez and three others avoided arrest on murder charges and held 79 people hostage for four days. The hostages were freed after intervention by Manobo tribal elders, but Perez and his relatives were arrested, angering other clan members.Rafal said the latest hostage crisis was prompted by the same clan feud involving Perez’s family that caused the 2009 ordeal — a conflict over land that passes through a logging route – Yahoonews