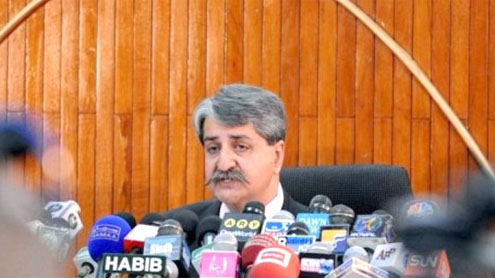 ISLAMABAD: China will invest in hydel and renewable energy power projects in the country as well as join hands with WAPDA for development of various large-scaled hydropower power projects.Chairman of the state owned China Three Gorges Project Corporation (CTGPC), Cao Guanging heading a ten-member Chinese delegation met with Federal Minister for Water and Power and Privatization, Syed Naveed Qamar here Tuesday.The delegation also showed interest to establish local manufacturing of wind power equipments in the country.Cao said that their corporation is looking for investment and other cooperation for 1100 MW Kohala Hydropower, 7100 MW Bunji Hydropower and 720 MW Karot hydropower and various other hydel projects in the country.He said that the corporation is all set to start construction of 50 MW wind power project in Jhampir (Sindh) and will complete it next year and it has also planned to install 2000 MW wind power and 300 MW solar power projects in Pakistan.

Federal Minister for Water and Power and Privatization, Syed Naveed Qamar lauded the Pak-China friendship and thanked Chinese investment in the hydel sector which will help to generate cheaper electricity for future requirements.The government will extend full cooperation and facilitate the Chinese in water, power, coal and renewable energy projects, he assured the delegation.Appreciating the local manufacturing of wind power machinery, Qamar also offered Chinese to invest in the Basha dam and Thar coal power projects as well as large scale manufacturing of solar panels and wind energy turbines in the country, as the corporation has specializing in renewable energy development and operation and the country has a great potential of solar and wind energy.CTGPC, a wholly state-owned enterprise, is a huge clean energy group with owns and operates the world’s largest hydropower station in China.The meeting was attended by Secretary of the ministry, Chairman WAPDA, MDs of PPIB, Pepco and CEO of AEDB and other senior officials of the ministry. – APP